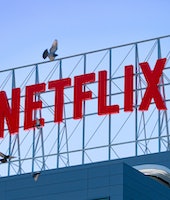 The number of users Netflix has lost so far this year alone.

Barely a month after gently threatening everyone with both an ad-supported subscription tier and laying the hammer down on all you degenerate password sharers out there, Netflix let it be known to investors that the streaming platform might need to roll out one or both contingency plans in the near future. As frustrating as that might be for all of us, Netflix has a pretty decent excuse for it: the company has already seen a net loss of about 200,000 paying users this year alone — the first decrease in 10 years. What’s more, that figure is expected to climb to 2 million users by mid-year.

"Our revenue growth has slowed considerably," Netflix revealed to investors yesterday. “Our relatively high household penetration — when including the large number of households sharing accounts — combined with competition, is creating revenue growth headwinds.”

There are a number of factors contributing to Netflix’s newfound dilemma. Blacklisting Russian customers following the country’s invasion of Ukraine cost it roughly 600-700K customers, coupled with the staggering rise in cost of living rates and increased streaming competition from the likes of HBO and Disney.

Changing their tune — Just last month, Netflix CFO Spencer Neumann was quoted as saying, “It’s not like we have religion against advertising, to be clear... But that’s not something that’s in our plans right now... We have a really nice scalable subscription model, and again, never say never, but it’s not in our plan.” So yeah, Neumann probably feels at least slightly comforted by adding that “never say never” clarifier in there.

As it stands, Netflix has “only” jacked up prices for users in recent months, but it has tested out an “authorized user” subscription add-on in certain Latin American markets. There is certainly a decent chance to see this kind of strategy play out here in the States, but that decision could easily backfire for the company. After all, people are already leery of paying any more money than necessary right now, even that small adjustment could send more subscribers over the edge.