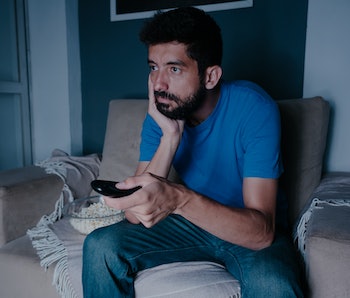 With so many people observing social distancing and limiting outdoor time to minimize COVID-19's spread most streaming services are witnessing a pretty big amount of consumer attention (and mooching) right now. Of course, when you're constantly on your subscription service, you inevitably reach a streaming block where you have no idea what to play next. And no one can really blame you. Netflix wants to fix that distinctly modern dilemma. According to TechCrunch, the company is testing a "shuffle" feature for some users at the moment.

If you're one of the targeted test subjects, you may have already noticed that your profile user screen shows "Shuffle Play" as an option. The idea is to help indecisive viewers make a concrete — and hopefully entertaining — choice. It's the streaming equivalent of Google's "I'm feeling lucky" search option, and our only question is why Netflix didn't offer it sooner?

Netflix has tried this before — Not one to shy away from experimentation, Netflix attempted a similar feature in 2019 with a "random episode" option on its Android app. The feature was only offered for a limited time, though, so many people likely never even heard about it, let alone tried it. And in that instance, it chose random episodes from shows you'd already show an interest in. Shuffle play casts a somewhat wider net.

How it works — One word: proximity. Those who have used "Shuffle Play" report that the feature relies on your previous viewing history or saved content from your watchlist. So, for example, I watch a ton of horror films on Netflix. If I have the option, Netflix's "Shuffle Play" will suggest something related to that genre and let me decide if I want to go with its pick.

It's not guaranteed that the recommendation will be right up your alley, but that's just as true when a friend whose taste you trust suggests something. The feature could help tackle analysis paralysis. As we've previously reported, the average streaming consumer is quite literally drowning in a flood of movies, series, and documentaries. Sometimes it's a relief to have someone else — or something else, in the case of an algorithm — make the decision for you.

Netflix isn't resting on its laurels — With millions of people stuck at home around the world and a growing number of rival streaming services launching, Netflix has been trying to improve its subscription service. It recently tightened access around profiles for parents who don't want their little ones watching questionable content, it also finally let people disable that insanely irritating autoplay feature so that your brain isn't bombarded with unexpected previews, and it's been creating hundreds of original shows and movies.

Furthermore, the company is so confident in its abilities, it's even taken added. a feature where if you don't watch anything for a year, it'll cancel your subscription.