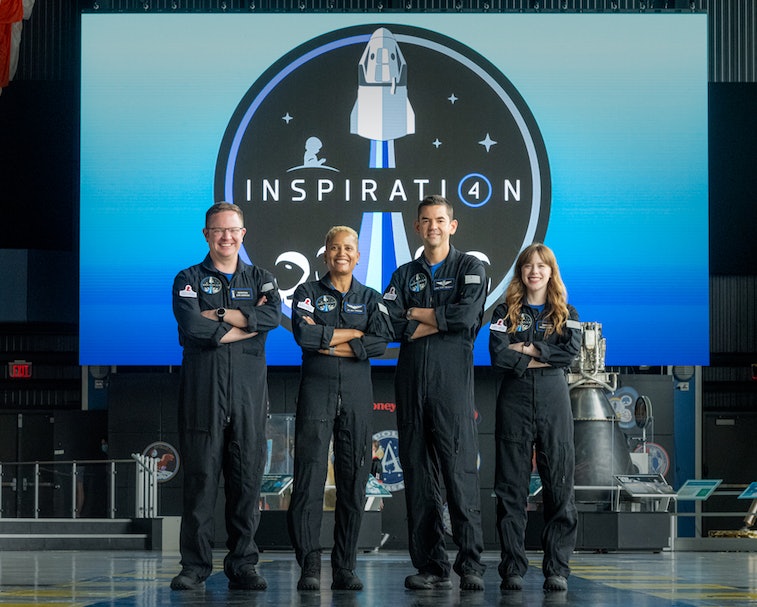 In a refreshing turn of events, some non-billionaires are heading to space next month. Currently scheduled for launch on September 15 into a multi-day orbit, SpaceX’s Inspiration4 is billed as the first “all-civilian” crew, and you know what? They look like some very nice people, and we wish them the best. The whole endeavor is also raising money and awareness for St. Jude’s Children’s Hospital—a safe, focus group-approved charitable cause that is also very nice and to whom we also wish all the best.

Yesterday, Netflix even announced a new, five-part documentary series entitled Countdown: Inspiration4 Mission to Space, which is advertised as a “near-real time” account of the crew’s training, launch, and return to Earth. There’s also going to be a very pleasant-sounding, educational “hybrid live-action animation special for kids and families” called A StoryBots Space Adventure. The docu-event doesn’t exactly roll off the tongue, but it’s directed by The Last Dance’s Jason Hehir, which was pretty good, so we’re sure Countdown will be very uplifting and entertaining and make Elon Musk’s SpaceX seem like a great, continued investment opportunity for the Department of Defense and uber-wealthy patrons hoping to take selfies dozens of miles above all these inconvenient floods and wildfires and plagues. Congrats, Mr. Technoking.

How far we’ve come — Inspiration4’s journey will take place just over two months after a historic July that saw multiple, incomprehensibly rich white men briefly blast their very big, competitive rockets into space. Everyone involved in the recent, exclusive sojourns avow that the stars will be open to the lowly common folk like you and me one day — but for the conceivable future it looks to be restricted to a very photogenic, accomplished few. And maybe Justin Bieber.

Please, just fund NASA instead — Okay, enough about the private vanity projects. Equally, if not more impressive is all the work NASA (remember them?) has been doing, like flying a helicopter drone on Mars and planning a new, upcoming lunar landing mission that will include at least one person of color. The Artemis trip is currently scheduled for sometime in 2024, and is in part also being made possible by... SpaceX. What a goddamn time to be alive.