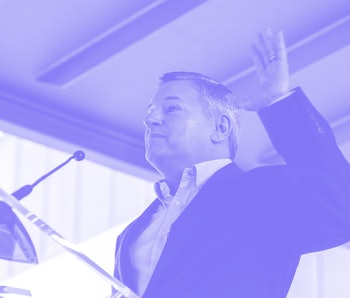 Netflix co-CEO Ted Sarandos is willing to admit he fumbled the ball in response to trans employees’ concerns about Dave Chapelle’s transphobic jokes in his latest comedy special. When asked by Variety whether or not he has any regrets about how he handled the situation, Sarandos responded in the affirmative.

“Obviously, I screwed up that internal communication,” he says. He continues that he should have “led with a lot more humanity.”

Sarandos isn’t wrong there — he did, indeed, display a remarkable lack of empathy in communicating with his employees. For the most part, his admission here comes across as disingenuous, though, for a number of reasons. First and foremost is that, after witnessing the fallout from his first internal memo, Sarandos doubled down with a second unapologetic memo.

So what’s changed since then? Well, trans Netflix employees (and many others) are planning a walkout today, and calls for a more total Netflix boycott are circulating, too. Which means — at least from the perspective of an outsider to the company — Sarandos’ apology looks a lot like a last-ditch attempt to save face the night before the debacle comes to a head.

Barely an apology — After admitting he messed up, Sarandos spends the rest of his Variety interview reminding us that his position on Chapelle’s special hasn’t actually changed at all since his first internal memo. In another interview with The Hollywood Reporter — that one also published last night — he says this explicitly: “No, my stance hasn’t changed.”

Those opinions largely center around what he refers to as “creative freedom and artistic expression.” It’s the same language he fell back on in both internal memos.

Sarandos says Netflix doesn’t allow hate speech as part of this artistic expression, but his definition of what constitutes “hate speech” is quite narrow. He says Netflix draws the line on content that “would intentionally call for physically harming other people or even remove protections.” This definition intentionally disregards the very real harm that can be caused by content that is hateful but does not explicitly call for violence. Convenient for Netflix.

Time for solidarity — Make no mistake: These two interviews being published the evening before a planned companywide walkout is a coordinated attempt to change the public narrative of this internal crisis. A mediocre attempt, given how very little Sarandos concedes.

Today’s walkout is happening whether Sarandos likes it or not. Earlier this week, the trans employee resource group published a list of demands that notably does not include removing Chapelle’s special from the service. The demands ask for Netflix to allocate more funds and create more space for trans and non-binary executives, allow the trans employee resource group to have a larger role in internal conversations about harmful content, and to add a disclaimer before titles with transphobic content.

Sarandos makes sure to mention in both new interviews that he has “spent the past couple of days listening to folks and sitting down with folks.” When asked about the list of demands, he mentions the “enormous amounts of content dollars” Netflix has spent on LGBTQ stories. Because adding a few more gay characters apparently cancels out explicitly transphobic content.

To the trans employee resource group’s other demands, it seems Sarandos had nothing to say.