Militia groups are having a field day on Facebook 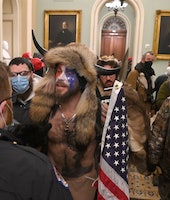 Over 200 far-right militia pages and 13 groups continue to openly operate and recruit on Facebook as of March 18 — despite vociferous condemnations by Mark Zuckerberg. The Facebook CEO is set to face Congress on Thursday in order to explain his network's efforts to grapple with digital extremism. But research from the nonprofit organization Tech Transparency Project and BuzzFeed News reveals that far-right militia activity on Facebook is far from over. In fact, Facebook appears to be helping it thrive.

Of the 200-plus pages and groups found, the research shows that 140 of those had "militia" explicitly displayed in their titles. The report also found that Facebook was automatically generating pages and groups for existing militias, thereby increasing their visibility online through its recommendation algorithm. Previously, Facebook sparked outrage for auto-creating ISIS pages in 2019.

Depending on what you "like'' by sharing a thumbs up or following certain pages, Facebook will direct you to associated or similar content. When it comes to incendiary pages which promote violence and uprisings, Facebook’s auto-generation process creates a vicious and dangerous cycle.

We’ve learned nothing — The findings come after QAnon conspiracy theorists and other right-wingers stormed Congress on January 6, which sparked a contentious nationwide discussion on domestic terrorism and radicalization.

TTP's director Katie Paul told BuzzFeed News that this research only confirms that Zuckerberg has yet to implement an effective strategy to curb digital hate and extremism. Instead, his social network seems to exacerbate the problem. "After nearly a year of promises to curb the organizing of militia groups on the platform — a threat that culminated in the attack on the Capitol January 6 — Facebook has shown that they are not capable of handling the dangers posed by their platform despite their claims to Congress and the public," Paul said.

In response to the research, Facebook says that the word "militia" alone does not warrant a ban per its guidelines, which also allows calls for death targeting public figures. Input previously reported Facebook had banned almost 800 QAnon groups from the platform on top of restricting posting ability for 1,950 groups, 440 pages, and more than 10,000 accounts associated with the conspiratorial movement, which believes — among other things — that a secret cannibalistic cabal controls the world.

Come Thursday, Zuckerberg will have to explain his social network's role in digital radicalization as well as misinformation. In fact, his written testimony begins by saying, "Instead of being granted immunity, platforms should be required to demonstrate that they have systems in place for identifying unlawful content and removing it." He could start by fixing his recommendation algorithm.