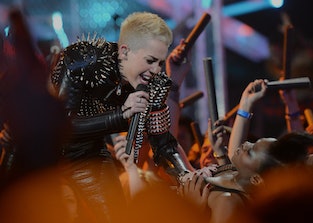 The amount Miley Cyrus and Cash App will give in stocks.

As she celebrates the 15th anniversary of the hit TV program Hannah Montana, artist and musician Miley Cyrus has partnered with finance app Cash App — known for its frequent giveaways — to share $1 million in stocks. Celebrating a milestone by giving fans cold, hard cash that could become profitable sounds like a fun time.

"Nothing is more important than investing in yourself," Cyrus posted on Instagram. "I want to spread ownership to as many people as I can, so I'm teaming up with Cash App to give out $1 million in stocks." The campaign will run between March 31 and April 13 or, as the press release states, when "the entirety of the million dollars is fully dispersed." We’re getting strong bouts of deja vu to Megan Thee Stallion’s bitcoin drop from 2020.

The Cyrus and Cash App campaign started on Wednesday and, per the press release, winners will be selected at random. Once picked by Team Cyrus, winners will have the opportunity to hold fractional stocks in publicly traded firms. The musician instructed people to share their $Cashtag plus a company of their choice in the comments section of her Instagram post to enter.

Stars want you to invest in yourself — While Cyrus' fans are celebrating and calling their queen generous — one particular stan even joked that she "outsold Karl Marx” which sounds like a reasonable assessment — she isn't the only musician to give back in this way. Last year, rapper Megan Thee Stallion joined the crypto-coin madness and handed out $1 million in bitcoin on Twitter, also in the form of a Cash App giveaway.

Megan and Cyrus put strong emphasis on financial literacy and self-empowerment for their fans. When the “Hot Girl” announced her bitcoin giveaway, she added, "Hotties, Bitcoin is a really smart investment and increases over time. Make sure you keep dropping y'all's Cash App names so call [sic] can make smart money moves."

Both announcements come during a time when crypto currencies and non-fungible token art are taking off — on steroids. On top of that, Cyrus’ campaign has popped up just two months after the GameStop stock surge, which left powerful hedge funds and even Congress baffled. The good news is that you don’t have to be an r/WallStreetBets user to get in on investing in stocks. Cyrus is happy to help you.