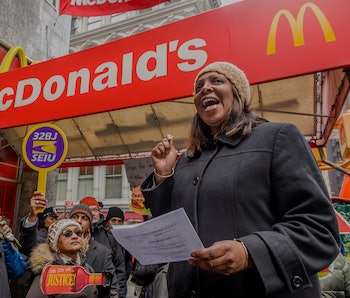 Rather than work on finding a mutually agreeable compromise with workers involved in the "Fight for $15" movement that seeks to boost workers' minimum wage to $15 an hour, McDonald's is spending money spying on those involved with the initiative, according to a damning and expansive report by Vice.

The outlet reviewed internal documents and spoke with two former employees who were familiar with McDonald's history of collecting "strategic intelligence" on workers involved with Fight for $15 and other unionizing or labor-focused activities. Employees who sought higher wages and a healthier work-life balance have been branded as "security threats" and McDonald's has defended its actions under the guise of ensuring the safety of other workers.

How we got here — Since Fight for $15 was founded in 2012 when 200 New York City fast-food workers walked off the jobs demanding pay increases and the right to organize, the movement has spread to more than 300 cities, and has succeeded in a handful of American states.

Despite decades of efforts to unionize, McDonald's workers still don't have a union. McDonald's has refused to come to the bargaining table, and has hidden behind its franchise model as a means of sidestepping calls for a company-wide labor movement. It's also spent a lot of money on anti-union or union avoidance firms and related efforts, Vice reports.

According to McDonald's, workers demanding a $15 minimum wage create "risk scenarios," because they've been known to block parking lots at restaurants and interfere with normal operations. You know, the sorts of things protests and strikes are intended to do when management won't bow to workers' demands.

Lewin also said that it is expected for corporations to keep an eye on worker activity to spot "any potential safety threats that could pose harm to our crew, franchisees, and customers in the nearly 40,000 communities globally in which we operate." Which is the usual line companies that don't want to support unionizing efforts turn to.

McDonald's adamant refusal to cede any ground to its labor force is not surprising. As we've reported in the past, big and small companies spend millions of dollars to hire union-busting spies and firms. Google discourages workers from talking about unions. Amazon refuses to see why its employees want labor representation. Instacart attempted to shroud its sacking of all workers who voted to unionize as a "structural" change. The list goes on. What's needed isn't patience, it's legislation... and fines.