America is the 'best,' says pundit after 19 kids killed in Texas shooting

“For all its very real problems, one shouldn’t lose sight of the fact that the contemporary United States of America is one of the best places to live in all of human history...” 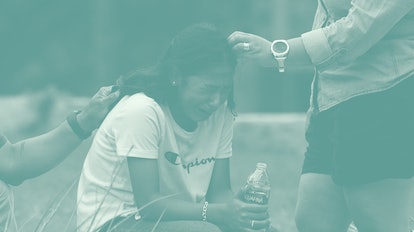 It has been said that there is no such thing as a good tweet. While that remains up for debate, no one would deny the existence of those that are unfathomably bad. This is the Input Bad Tweet Hall of Fame.

And here we are again.

Children left bloodied and dead adrift another grotesque wave of American violence. New traumas forming, old ones reawakened. Ineffective liberal decision makers offer television cameras empty platitudes while delusional political apex predators of the fascist right simultaneously regurgitate their thoughts, prayers, and humble suggestions to arm teachers with weapons. The cycle will continue and scabs will form over our hurt, only to be ripped open again in a matter of days or weeks. You can’t have scars when your wounds aren’t allowed to heal.

But take heart, my desperate and exhausted neighbors: Never forget that you live in capital “A” America, and that it could always be so much worse... like in a few, inevitable news cycles’ time when even more lives are snuffed out for no reason and with no remorse. Just keep your chin up and your head down, according to Bloomberg pundit Matthew Yglesias. According to him and a baffling number of others, this still remains somehow, someway the Best Country of All Time. And now’s clearly the time to remind everyone of this immutable fact.

“For all its very real problems, one shouldn’t lose sight of the fact that the contemporary United States of America is one of the best places to live in all of human history and there’s a reason tons of people of all kinds from all around the world clamor to move here,” Yglesias tweeted last night, mere hours after news broke of the worst elementary school mass shooting in eight years — a statistic that’s clarifying information itself encapsulates everything you need to know about the U.S. gun cult.

Speaking of statistics, here’s another one for Matthew: Australia hasn’t had a mass shooting since 1996. Meanwhile, there have been a total of 22 mass shootings in Germany since 1913, only 4 of which included double digit fatalities. Contrary to popular belief, you can still own firearms in these nations — just not guns designed specifically for massacring your targets. Meanwhile, we’ve endured 202 gun-induced terror incidents so far this year alone in America, and some people are calling for more guns as a solution.

In any case, Yglesias publicly apologized earlier this morning for his puerile “Proud to Be an American” comfort tweet, only after being ratio’ed into the depths of space. “Like a lot of people, I am frustrated by the fact that the country does not respond to the death toll associated with widespread gun ownership in the way that I would like,” he soon added. “And I’m doubly frustrated that I don’t personally feel like I have great ideas on how to change that.”

It’s a totally understandable feeling, but the first step towards finding solutions to our nightmare is abandoning Yglesias’ brand of American Exceptionalist jingoism. What kind of “quality” is the United States’ quality of life when we are actively forced to continue enduring this insanity?