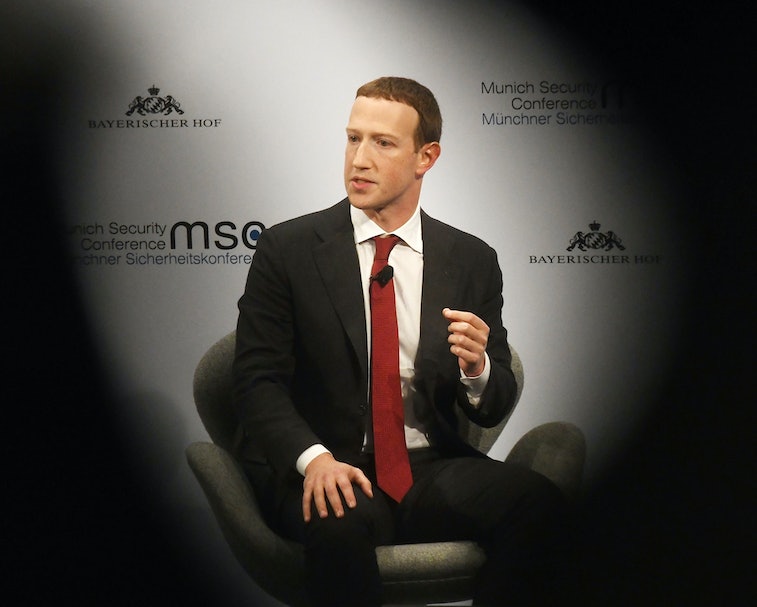 Facebook CEO Mark Zuckerberg today defended his decision to leave up a controversial post from President Trump. The post, which referred to ongoing protests in response to the murder of George Floyd, said, "when the looting starts, the shooting starts."

Zuckerberg addressed the decision in a video call with over 25,000 employees, according to Recode. During the call he said that following a review of history surrounding the phrase, he concluded that it was not meant as a racial dog whistle intended to incite violence. The phrase is widely attributed to Walter Headley, a police chief in Miami, Florida, who in the 1960s accused "young hoodlums" of taking advantage of the civil rights movement to commit violence. He ordered troops to respond to violence with shotguns.

Tensions have remained high this week around the country as protests continue. Police officers have driven into protesters and punched journalists in the face without any obvious incitement, empowered by those and other comments made by Trump, who has called protesters "THUGS." Trump's own comments are frequently found in connection with cases of real-world violence and assault.

Even though the conference call was limited to employees, Zuckerberg still only answered questions from a preselected list. One employee asked him how many black people were involved in the final decision to leave Trump's post live, to which Zuckerberg said only one of the six people involved was black.

Zuck is unstoppable — More than 400 employees staged a virtual walk-out yesterday in response to Facebook's inaction on the post. Two employees have also resigned, while high-level execs have spoken out. Facebook recently named members to an independent oversight board that is supposed to review cases like this one, but it hasn't gone live yet. Zuckerberg, meanwhile, continues to wield total control over Facebook and has no checks in place from either his board of directors or the stock market, which only cares about all the money Facebook rakes in.

Twitter has been taking heat over Trump's identical post on its platform, though in that case it's because the company did take action. It didn't remove the tweet but instead chose to hide it behind a module explaining that the tweet violates Twitter's guidelines. Twitter is trying to toe the line between allowing Trump to remain on its platform while also making it a safer place for its users.

It's worked for Zuck this long, why stop? — Zuckerberg recently criticized Twitter for doing so little as to even fact-check Trump, saying that social media platforms shouldn't be the arbiters of truth, even as he promises to clean up misinformation and hate speech on Facebook in response to the 2016 presidential election, which many Democrats say Republicans exploited with misinformation in order to win the election.

Interestingly, Zuckerberg hedged during today's call by saying that Facebook may update its policies around moderating potentially violent political speech, but that any change wouldn't happen overnight. “These policies have to be developed,” Zuckerberg said. There’s “no way we can do something like that on the fly.” Hasn't the company had enough time by now? After all these controversies Zuckerberg likes to say he's "concerned" about the comments, which he did here again, but then never actually does anything.

Zuckerberg has always been stubborn in the face of immense pushback, and can you blame him? He faced adversity all along his rise to the top, but Facebook is now worth $660 billion and he's king of the world. Today's decision to not move an inch is just the last of many examples, and it doesn't sound like Zuckerberg is ready to change his ways anytime soon even though he's so obviously doing the wrong thing here by amplifying vitriol.