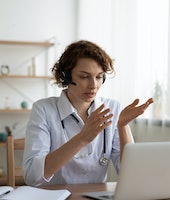 The hourly wage after training-fee deductions for some Arise agents.

In an eye-opening deep dive, ProPublica detailed the inner workings of Arise Virtual Solutions on Friday. Arise provides customer service agents and related contractor services for companies like Disney, Airbnb, Intuit, Comcast, and Instacart. The company targets women, people of color, and people with disabilities, and requires they invest in expensive home setups, and forces them to pay for training sessions. The highest wage mentioned in the report, co-researched with Planet Money, was $12 per hour, with the lowest clocking in at an abysmal $2.52.

What it takes to be an Arise agent — First, prospective agents must invest in their home office. This includes items you might expect like a computer, headsets, and a dedicated phone line, but they’re also encouraged to have carpeting and a solid-core door to block out sounds from the home. Agents reportedly lie about why their office is so quiet, play white noise, or even run YouTube videos of call center sounds. If video calls are required, they may also have to buy branded backdrops and on-brand professional clothing.

Beyond the office, they also take on the costs for their own background checks and training courses which require days — if not weeks — of their unpaid time. Arise also needs to approve the quality of their voice and get them to sign a nondisclosure form that prohibits them from ever talking about the clients they've worked for.

Deductions everywhere — When they finally do get to work, Arise contractors are essentially chained to their desks, often only getting paid for time on a call, not time spent waiting for one. And that’s assuming they can get reliable shifts that last longer than 30 minutes. Finally, once connected with a customer, they can be met with anything from sexual harassment to petulant callers threatening to leave bad, job-jeopardizing reviews. As independent contractors, they’re not connected to the companies systems and often cannot offer meaningful help with complex issues or technical glitches.

Even in these scenarios, they must be on their best behavior with companies like AT&T, Barnes & Noble, and Intuit sporadically scoring their work. AT&T and Barnes & Noble have 25 and 40 requirements, respectively, that if violated can lead to termination. Intuit scores conversations to the sixth decimal point and can terminate contracts if there are too many short calls. In recent years, the company has built an outsourced customer service workforce of over 20,000 people (more than double its employee workforce), cutting customer service costs by 15 percent.

This web of control extends even further into agents’ lives. Contracts can require weekend and holiday work or even require random drug tests. In an arbitration hearing, a former agent detailed a surprise inspection from two Arise instructors. The scope of the audit wasn’t made clear, but they arrived unannounced, checked the contractor's ID, and tested their internet connection.

How does Arise work? — Something (unsurprisingly) goes wrong with your AT&T service so you call the customer service line. Odds are good you'll speak to someone who works for Arise, or one of the "independent businesses" Arise contracts major company's call center work to. You're not speaking to someone who actually works for AT&T.

These “independent businesses” are heavily marketed and typically run by women, often women of color (a similar makeup to the agent workforce), but a former Arise CEO estimates that most of them only have one employee — the founder. Both Arise and the independent business charge agents fees twice a month.

The first iteration of Arise came in the form of Toronto-based Willow Corp. back in the 1980s. Founder and author Richard Cherry wanted to tap into a workforce of people with disabilities for remote, customer service operations. When Willow went belly up in the 1990s, Cherry and his wife started over in Florida. Independent businesses are encouraged to recruit agents, putting up flyers in high traffic areas as well as associations “for the handicapped or disabled.”

A rollercoaster of legal recourse — In addition to nondisclosure agreements, Arise has also tried to enforce a class-action waiver with increased degrees of success. Federal class-action suits were made against the company in 2011, 2012, 2013, and 2016. In August of 2016, Charles Muhl, an administrative law judge, ruled that the company had to stop forcing agents to sign the waiver and nullify all previous ones.

Donald Trump’s first Supreme Court nominee, Neil Gorsuch, wrote the majority decision for the May 2018 ruling on Epic Systems Corp. v. Lewis. The court ruled 5 to 4 that corporations can bar class-action lawsuits in their arbitration clauses, and Muhl’s ruling was overturned a few months later. The late Justice Ruth Bader Ginsburg said from the bench that the ruling will cause a “huge under-enforcement of federal and state statutes designed to advance the well being of vulnerable workers.”

In response to the lawsuits the company has faced, Arise’s legal department has cracked down on company semantics. Agents schedule “intervals” instead of hours and are “servicing,” not working. They also have their services “enhanced” rather than being coached, and passed customers up to “performance facilitators” instead of supervisors. This language helps the company assert that the agents aren’t employees. Arise doesn’t hire agents in certain states, especially those with strong labor laws, including California, Connecticut, Maryland, Massachusetts, New York, Oregon, and Wisconsin.

Sound familiar? — The independent contractor-fueled gig economy is slowly facing a reckoning. Some Arise agents are glad they can work from home and support their families, but the personal cost is high. Former agent Yvonne Corder was so terrified of losing the $9 an hour job that she once worked — uh, serviced — customers through a bout of food poisoning, putting callers on hold to vomit.

Companies are so desperate to underpay their contracted workers that they’ll come up with anything to avoid calling them employees. Uber, Lyft, Doordash, and Instacart are spending millions on a ballot measure to avoid doing just that in California. Bird launched a sketchy franchise scheme at the pandemic’s onset that exposes workers to intense legal and financial liabilities. Arise has just managed to do this work in the shadows.

In addition to the companies previously mentioned, Amazon, Apple, eBay, Home Depot, Peloton, Princess Cruises, Signet Jewelers, Staples, Virgin Atlantic, and Walgreens currently or formerly paid for Arise’s services. Of the 38 corporations that have used the Arise over its operating years, only Signet (owner of Zales, Kay, and Jared Jewelers) sent a statement to ProPublica involving any consequences. The company had planned to supplement its in-house team during peak seasons, an arrangement which is now “paused pending further due diligence.”