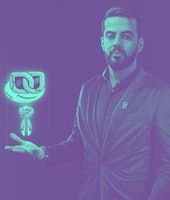 The NFT craze may have crested the initial, absolutely ridiculous hype phase, but it’s not dead just yet. This year alone, OpenSea’s NFT transactions fell more than 50 percent — from $5 billion in January to just $2.5 billion last month. Many are beginning to learn this the hard way, too. Case in point: A man who bought an NFT of Twitter founder and former CEO Jack Dorsey’s first tweet (available for free right here) for approximately $2.9 million last year hoped to auction it off earlier this month for $48 million, only to get a max bid of 4.2 ETH, or roughly $12,721.30 at the time of writing.

Sina Estavi, a “crypto entrepreneur” recently released from a nine-month prison sentence in his home country of Iran for “disrupting the economic system,” hoped to make back his initial investment and then some in the screenshot of Dorsey’s tweet, only to have reality come crashing down on his dreams of seemingly random, arbitrarily awarded wealth. Faced with taking a multimillion-dollar loss, Estavi told Coindesk earlier this week, “The deadline I set was over, but if I get a good offer, I might accept it, I might never sell it.”

So far, it seems he’s made good on this sentiment.

How charitable of him — If $48 million sounds like an obscene amount of money to “own” Dorsey’s first tweet, well you don’t understand, obviously. See, half of that $48 million is supposedly allocated for charity! Bet you feel pretty bad now, huh?

In any case, Estavi sounds like he’s still holding out hope for some real profits here. “Dominoes started to move...” he tweeted earlier this morning, referring to his new highest of about $12,700. Godspeed, Estavi. Godspeed.