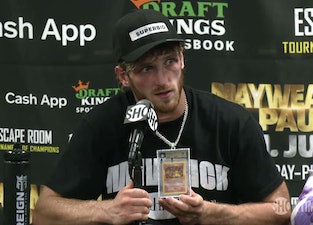 Paul dubbed it a "million-dollar card" after the fight.

Logan Paul’s extremely hyped boxing match against former world champion Floyd Mayweather finally came to fruition last night. The fight went for eight rounds and ended without a knockout — though by all accounts Mayweather certainly maintained control of the match.

Paul, a controversial YouTuber, had only participated in one boxing match before last night — a fight he lost. The lead-up to Paul’s fight with Mayweather has felt more like a meme than an actual bet, and Paul made that even more evident by wearing a Pokémon card around his neck for the match. Now he says that sweaty Charizard card is worth a million dollars.

In a press conference after the match, Paul was asked for details about the card, and he specified that it’s a first-edition BGS 10 — one of only three in the world. He called the card his “prized possession,” adding that, ever since he had the card graded, the momentum in his life has been “crazy.”

Maybe he’s right — Logan Paul is not a professional card trader, even if he does have some experience dabbling in the hobby as of late, so his million-dollar valuation should be taken with more than one grain of salt. But he’s right on one count: that Charizard is even more of a collector’s item than it was before.

Paul first purchased the Charizard from the one-and-only King Pokémon himself, during a visit last October. He purchased the card for $150,000 at the time, citing it as an appreciating asset. He said he was done buying things that wouldn’t make him money.

Paul knew what he was doing by wearing his Charizard in place of more traditional bling. Whether or not it’s actually worth a full million dollars, it’s absolutely worth more than when he first purchased it.

Pokémon frenzy — Despite his many haters, Logan Paul has amassed an enormous following on the internet. Whether we like it or not, that means he’s influential. As such, he’s largely credited with being one of the main catalysts for the current Pokémon card craze. That frenzy has now reached such heights that it’s become problematic — and sometimes outright dangerous — for retailers to even carry Pokémon cards in their stores.

Paul’s decision to wear that fated Charizard card in the pay-per-view boxing ring last night was pretty ridiculous, all told, but that’s nothing new for Paul. The card may not have brought him the good luck he hoped for in the fight, but it definitely made his Pokémon card collection more valuable.