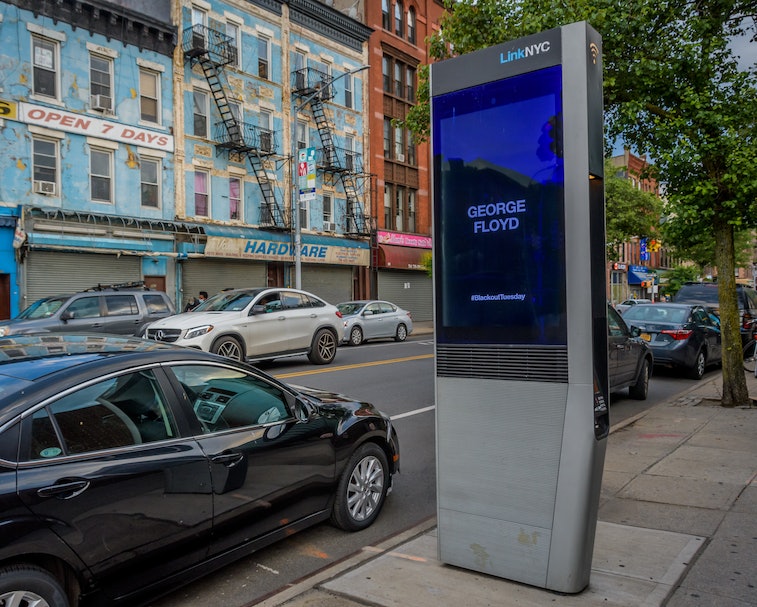 Across the five boroughs of New York City, information kiosks provided by LinkNYC are cycling through the names of Black victims of police violence. Many in NYC wondered aloud: was this an official initiative or a hacking?

Though neither LinkNYC nor Intersection — the company that produces the kiosks — have made public statements about the display, a representative from Intersection has confirmed to Input that this is indeed an official initiative from the companies. LinkNYC also responded this morning to questions about the display on Twitter, including the one below from Jacob Kleinman, a senior entertainment editor at Inverse.

Ten names of murdered Black people cycle through each of LinkNYC’s 1,780 displays, interspersed with other official information from the city. The names have been on display since June 2 and will continue to be shown at least through the coming weekend, perhaps longer, the representative confirmed.

The initiative is a small but meaningful move from LinkNYC and Intersection, both of whom operate independently from the city’s government.

#SayTheirNames — The LinkNYC display is part of the “Say Their Name” initiative, which seeks to remember victims of racist police violence. Citing numbers of victims can feel abstract; by repeating the names of victims, we remind ourselves and others of the specific humans affected by systematic and systemic racism.

What’s LinkNYC? — You’ve likely seen the person-sized screens if you’ve even passed through New York City in the last few years. They’re 55-inch info hubs with free Wi-Fi that the city began installing in 2014, and which have since become a staple of the city. Usually, the kiosks display a mixture of advertising — to pay for their continued existence — and local information. They also have USB ports that enable people to charge their devices while out and about.

Are they safe? — Because so much of the information is dedicated to NYC life, it’s easy to forget they’re not actually run by the city itself. That independence has been called into question more than once in the past — NYC residents are rightfully wary of devices that offer free internet connectivity, especially when they have cameras attached to them. Those cameras weren’t actually standard when the kiosks were first installed. According to The Intercept, they were only installed in 2017.

But as far as we know, the LinkNYC kiosks are harmless. Connecting to Wi-Fi offered by one of the kiosks does, of course, bring with it some inherent dangers: you’re agreeing to share some basic, anonymous device information and browsing history.

As for those cameras: the only time we know their footage has actually been used is in a case where one man smashed and vandalized 42 of the kiosks. The footage was used to identify the culprit.

LinkNYC is using its platform — and it’s a wide one — to remind New Yorkers of the human toll of police violence. As protests rage on in the city, it’s a gesture that carries poignancy. We hope the company and those working for it have contributed in more concrete ways, too, such as donating to bail funds.