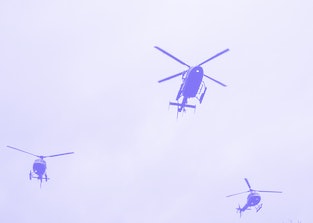 Nearly two terabytes of footage from police helicopters has been leaked by activist group Distributed Denial of Secrets (DDoSecrets). The group doesn’t know exactly who found and saved the videos, and no affiliation or motivation for the leak was given, either. Emma Best, DDoSecrets co-founder, told Wired that the source only disclosed that the two police departments in question had been storing their footage in unsecured cloud drives.

The surveillance footage was captured by Texas’ Dallas Police Department and Georgia’s State Patrol. Some of the footage is the kind of routine surveillance you’d expect law enforcement to carry out using helicopters — like aerial views of police pulling cars over on the highway. But a fair amount of the video is just general, aimless surveillance.

Privacy activist groups like DDoSecrets and Fight for the Future say the stockpiled footage is illustrative of just how extensive law enforcement surveillance has become. And then there’s the fact that all this data was left on unsecured cloud servers, ripe for the picking.

They just left it out in the open — It’s concerning enough that this footage exists; worse still is how very easy it was for someone to download nearly two terabytes of it and send it over to DDoSecrets.

“This is exactly one of the things that people are constantly warned about, especially when it comes to government surveillance and corporate data mining,” Best told Wired. “Not only is the surveillance itself problematic and worrisome, but the data is not handled in the ideal conditions we’re always promised.

When asked for comment about the helicopter footage, the Dallas Police Department said simply that it could not speak publicly about how the group stores its data. A spokesperson pointed out that any and all helicopter video is available for request through the Open Records Act.

The Atlanta-based State Patrol did not respond to Wired’s requests for comment.

Because drones weren’t bad enough — Much of the contemporary discourse around police surveillance focuses on drones and other robots. This is understandable, given that they can, in the right circumstances, literally hunt and kill their targets. Police use of drones has increased exponentially in the last few years, and they’re often acquired by very shady means. Concerning, to say the least.

All this helicopter footage serves as a reminder that drones and robots aren’t the only technology police are using to complete their panopticon. With camera technology sharper and more affordable than ever, helicopters can be just as invasive as drones. Because their presence in the skies has been normalized over the years, we’re less likely to pay particular attention to what footage they might be capturing, too.

Guess it’s time to add helicopters to the list of worrying surveillance techniques used by America’s cops. Also, can someone please help these boomers secure their cloud infrastructure?