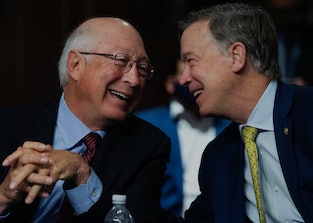 The U.S. federal government is deeper than ever before in investigations into the harms Facebook has wrought upon the world. As it turns out, two of the senators who questioned whistleblower Frances Haugen earlier this month are actually invested in Facebook. Neither made their investments known during the hearing. They did not do so before or after, either.

Senators John Hickenlooper (D-Colo.) and Jerry Moran (R-Kans.) both sit on the Senate subcommittee that’s leading Congress’ ongoing investigation. Sen. Moran’s stake in Facebook has a maximum value of about $30,000, while Sen. Hickenlooper’s investment is much higher at a max of $500,000.

All told, members of the Senate and the House of Representatives own millions in Facebook stock, either individually, via a spouse, jointly, or via a dependent child, according to a new study by Sludge. While this is not in any way illegal — and it happens quite often with industries overseen by elected officials — it certainly provides some color to the interests these lawmakers will have at heart while moving forward with regulatory discussions.

Bipartisan investments — The full list of lawmakers with Facebook investments is quite staggering. Sludge found a total of five Senate members and 24 House members who currently hold Facebook stock. The value of this combined stock is somewhere between $2.3 million and $8.4 million. (Lawmakers are only required to disclose investments in wide ranges, so the exact value of these investments is uncertain.)

Still, even the less valuable investments from the list are problematic. Rep. Debbie Dingell (D-Mich.), for example, has invested between $50,000 and $100,000 in Facebook, and she is a member of the House Energy and Commerce Committee — one segment of the House currently working on Section 230 reform. Two other members of that subcommittee, Rep. John Curtis (R-Utah) and Rep. Fred Upton, are also invested in Facebook.

Something to watch for — During Haugen’s questioning, Sen. Richard Blumenthal mentioned more than once that Facebook’s intense lobbying is one of the biggest hurdles to creating comprehensive social media policies in the U.S. While Big Tech has, overall, spent less on lobbying in the recent past than it did previously, Facebook’s spending has actually gone up, with $19.8 million in lobbying funds last year.

With so much money on the line, going up against Facebook feels nigh impossible. That’s not to say we shouldn’t keep pushing for lawmakers to enact reform — instead, it means we must be even more vigilant in voicing our concerns.