Kyle Rittenhouse memes his own crybaby testimony for dig at Biden

“No, it’s not Lemon Heads.. it’s the burning hole in my pocket thanks to a Joe Biden presidency..” 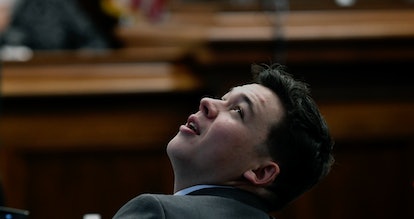 It has been said that there is no such thing as a good tweet.While that remains up for debate, no one would deny the existence of those that are unfathomably bad. This is the Input Bad Tweet Hall of Fame.

Kyle Rittenhouse murdered two men in 2020 and got away with it thanks to a good ol’-fashioned American combination of institutionalized racism, judicial malfeasance, and one uncomfortable video of a dubious courtroom sob session that went viral to the surprise of no one. Although he has since managed to alienate the coveted QAnon demographic, rest assured: the kid is still a media-hungry conservative jackass, and unfortunately still has the social media accounts to prove it.

Last night, Rittenhouse tweeted a clip of his egregiously put-on, teary-eyed testimonial Photoshopped to look like he was standing at the gas pump attempting to fill up his tank. “No, it’s not Lemon Heads,” he wrote, referring to critics’ past jokes about false tears, “it’s the burning hole in my pocket thanks to a Joe Biden presidency.” He then followed up with a credit to “mememaster” @drefanzor for the content, which somehow made the whole bit even worse.

Biden, of course, is not responsible for Rittenhouse’s “burning hole.” That honor would go to a destabilized geopolitical climate and an economy that is still reeling from the economic ripple effects of COVID-19. In any case, Rittenhouse’s apparent ignorance and/or apathy regarding Russia might curry favor with the QAnon crowd, who apparently can’t get enough of Daddy Putin. It’s impressive to see the kid already embracing his O.J. post-acquittal life so soon — welcome to the Bad Tweet Hall of Fame, son.