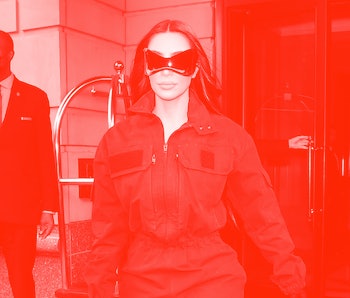 Kim Kardashian is amongst the highest-profile figures named in a new class-action lawsuit against EthereumMax, a cryptocurrency that’s recently been revealed as a pump-and-dump scheme. Renowned boxer Floyd Mayweather Jr. is mentioned explicitly in the case as well. The lawsuit alleges that both celebs’ promotion of EthereumMax helped make the scheme possible.

Kardashian, herself a would-be lawyer, promoted EthereumMax on her Instagram account back in June 2021. “Are you guys into crypto?” Kardashian wrote on her Instagram Story. She said her “friends” had told her about EthereumMax but included the #AD disclaimer as well. She also made sure to remind her 251 million followers that the post was not “financial advice.”

The celebrity advertisers are only one part of the lawsuit; EthereumMax itself is being sued, too. The company is denying the allegations as fully as humanly possible.

“The deceptive narrative associated with the recent allegations is riddled with misinformation about the EthereumMax project,” EthereumMax said in a statement. “We dispute the allegations and look forward to the truth coming out.”

Those who lost money in the scheme feel a little differently about it.

Did Kim know? — The extent to which Mayweather and Kardashian were aware of EthereumMax’s sketchiness is unknowable right now. Neither has made any public comment about the lawsuit. It’s entirely possible that neither really looked into the cryptocurrency’s viability before signing off for the paid promotion.

The impact of their promotion is undeniable, though. The lawsuit says the price of EthereumMax rose a staggering 632 percent after Mayweather began promoting it. He even wore the project’s URL on the shorts he donned for his fight with Logan Paul.

It’s unclear who, exactly, is behind EthereumMax. Its creators aren’t even named in the lawsuit, even though their brand is the reason for its existence. All we do know is that they made off with millions by selling their EthereumMax tokens after the price had skyrocketed. Just after Kardashian’s post, the value of the coin dropped by 98 percent. Classic pump-and-dump.

Scams left and right — Those affected by the pump-and-dump now want EthereumMax and its perpetrators to answer for their actions. Whether or not they knew about the scheme, Kardashian and Mayweather did help EthereumMax’s creators carry out the deed.

Celebrities have been recruited to push crypto for years now, but 2021 brought the tactic to new highs (and lows). Have you seen Matt Damon’s ridiculous Crypto.com ad? Go watch if you haven’t — it’s a great way to understand just how messy this influencer crypto business is.

To be fair, deciphering which crypto projects are legitimate and which are straight-up scams can be quite tricky. That’s especially true now, given the sheer number of crypto projects through which one must sift to find the gems.

We hope that, at the very least, Kim and Floyd learn to read up on new currencies before promoting them. But then again… we’re talking about Kim Kardashian, who doesn’t bat a single artificial eyelash at the prospect of promoting appetite-suppressing lollipops. Learning a lesson through this might be asking for too much.