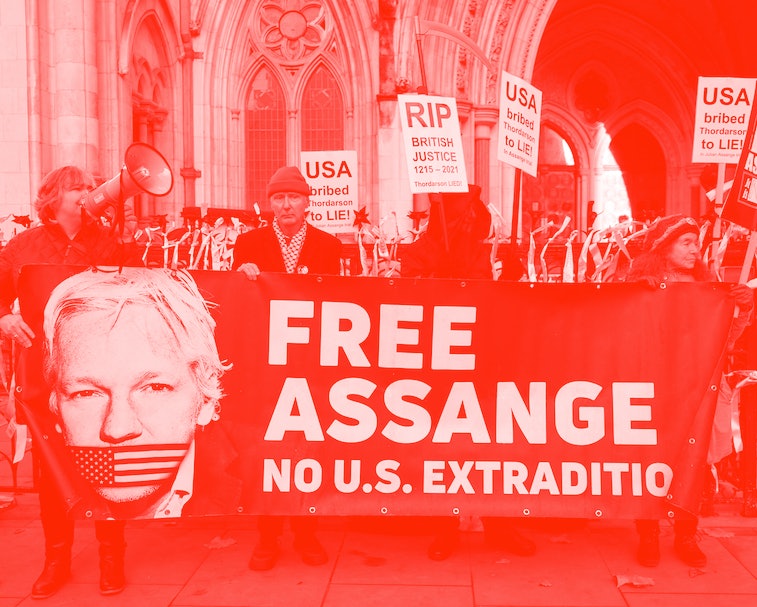 Julian Assange, WikiLeaks founder and perpetual political asylum-seeker, will likely be extradited to the United States soon, after the U.K. High Court agreed to an appeal by the U.S. to revoke an earlier legal decision. The Biden administration has been pushing for Assange’s extradition this year, a continuation of the hunt started under Trump’s rule.

Assange’s extradition case was thrown out of a lower U.K. court in January of this year on the basis of mental health. The judge in that ruling reasoned that Assange would be at extreme risk of suicide if he were to be extradited to the U.S. The January judge did not entertain the defense’s arguments about freedom of press or political motivations.

The Biden administration was finally able to convince the U.K.’s High Court that Assange’s eventual imprisonment would be handled with the utmost care. He will not be held in a high-security environment and will be allowed to serve his sentence in his home country of Australia.

At least he wasn’t murdered — Whether or not you agree with the U.K.’s decision to extradite Assange will very much depend upon your personal politics; his case is unusual and nuanced. Here’s something that might be a bit easier to agree upon: No matter his alleged crimes, it’s for the best that he wasn’t murdered by the CIA.

We only say this because it’s recently come to light that the CIA did, indeed, consider kidnapping and killing Assange. That plotting occurred back in 2017, after Assange’s site Wikileaks lifted the veil on a suite of classified CIA hacking tools called Vault 7. An anonymous national security official said the CIA leadership was, at the time, “completely detached from reality” because they’d been so embarrassed by the leak.

Begging for reform — Assange’s case is a complicated one, to say the least. His site Wikileaks has become the single most important platform for leaking political documents in the last decade, publishing work by high-profile figures like ex-CIA contractor Edward Snowden. As if this were not enough for him to become one of the most hated figures in U.S. government circles, he’s also been accused of assisting Chelsea Manning to mask her hacking of high-level government systems.

He now faces 17 counts of violating the Espionage Act and conspiring to hack government computers. He could be sentenced to up to 175 years in prison, all told.

Assange’s legal team has said it plans to appeal the U.K.’s decision to allow extradition. His fiancé said in a statement published on Wikileaks that this week’s decision is a “grave miscarriage of justice.”