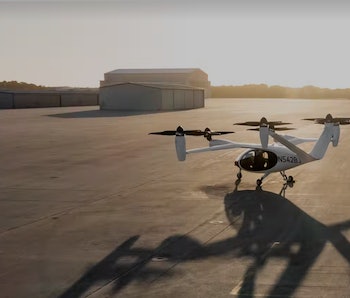 Joby, the electric air taxi ride share service, is one step closer to literally holding wealth just above our heads. Earlier today, the aviation company announced that it has secured a crucial FAA certification required for the startup’s path to providing presumably rich-as-hell commuters with an aerial alternative to associating with all us peasants on the congested city roadways.

As explained by Reuters, the FAA’s Part 135 Air Carrier Certificate is “among the three regulatory approvals critical for Joby's planned launch of all-electric aerial ride sharing service in 2024.” This particular hurdle cleared by Joby will allow it to operate its proposed line of electric vertical take-off and landing (eVTOL) vehicles in areas such as New York City, where company reps claim passengers will be able to travel between a helipad near the World Trade Center downtown to JFK International Airport in just seven minutes.

Meanwhile, Reuters also reports that Joby lost around $62.3 million during 2022’s first financial quarter. Oh, and one of its piloted prototypes crashed in California back in February. But, hey, no injuries or fatalities, so the sky’s still the limit!

Aerial market maneuvers — As happy as Joby execs probably are at the moment, there is still absolutely no guarantee that we’ll be seeing these dystopian taxis zipping around above our heads anytime soon. Unlike EV ride sharing services here on the ground, many critics have repeatedly pointed out that air taxis like this are essentially pointless vanity projects. Sure, a few Joby crafts in the air might relieve some terrestrial traffic, but it’s only making actual flight paths that much more congested. You’re not really solving a problem, as much as just shuffling things around.

Then there’s the simple, pretty obvious fact that this type of transit is currently prohibitively expensive. A 10-minute Joby Jaunt (copyright, us) probably won’t be as cheap as, y’know, a basic Uber ride, which means this kind of novelty service will be reserved for the particularly rich among us. Boutique services are one thing — boutique air taxis could easily be many steps too far from being truly feasible.