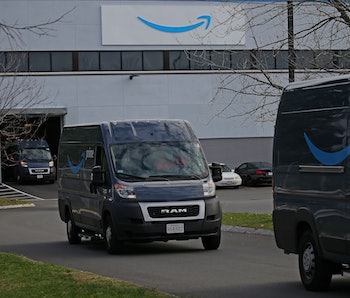 It's not so much a question of "If?" but "When?" big tech companies will begin rolling out their own siloed cryptocurrency alternatives. It's a scenario that feels as inevitable as it does worrisome, and if recent findings are to be believed, the most inevitable and worrisome of them all is nigh: According to recent job postings that have since been removed, Amazon is almost certainly exploring an in-house cryptocurrency payment system for its various services, including Prime Video.

"We are looking for a leader to help us launch a new payment product starting with Mexico as our initial launch country," read the listing, as reported by Coin Telegraph and others. "This product will enable customers to convert their cash into digital currency using which customers can enjoy online services including shopping for goods and/or services like Prime Video.” Oh joy.

Seeking applicants for the Digital Emerging Payments division — The position, a Software Development Manager, was posted alongside other similar openings within Amazon's "Digital Emerging Payments" project division. While the job description mentioned Mexico as the first country slated to be introduced to the new "payment product," others are sure to follow. Although now removed, the listing was first posted on February 4, not long after the company announced the news that Jeff Bezos would be stepping down as CEO. Replacing him will be Andy Jassy, who previously helped launch Amazon's Managed Blockchain service as AWS CEO, and yes, we encourage everyone to read between the lines on that decision.

Probably not related to Amazon Coins — While details are purposefully scarce at the moment, it seems unlikely the new venture will relate to Amazon Coins, the company's app credit payment system first launched in 2013. Although Amazon has referred to its Coins program as a "virtual currency" in the past, in reality the service is essentially just a digital gift card registry for apps, Kindle titles, and various other microtransactions.

A "Digital Emerging Payments" project strongly hints at something more robust than token purchases and seasonal savings deals, especially when one considers how restrictive Amazon remains for customers' current payment options. Both Paypal and Bitcoin, for example, are still not options for any direct Amazon sales across the company's many platforms.

Have we thought this through? — Although clearly in its nascent stages, it looks like PrimePay/PrimeCoin/BezosBucks/whatever-the-hell-they-name-it is coming for markets in the near future, and we should probably be concerned. Realistically (we hope), Amazon is not about to set up its own, non-fiat-backed currency system, but you can bet your bottom Bitcoin that Bezos and company aren't salivating at the thought of bypassing U.S. regulatory systems any way they can. With Tesla buying up Bitcoin by the literal billions and major institutions investigating (or just creating) their own cryptocurrency banking options, society is heading towards a massive fintech reckoning.

If we were more optimistic, we'd say we hope people will think this through before diving off the crypto cliff. But, y'know, we aren't... perhaps it's time to brush up on some Bitcoin basics, if you haven't already.