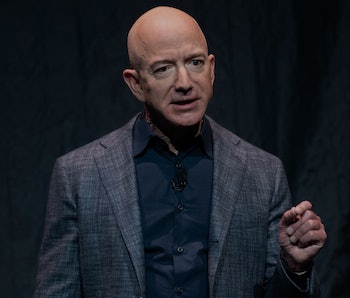 Amazon is working on a system to test all of its employees in-house, CEO Jeff Bezos said in an annual letter to shareholders. Bezos says the company plans to test even asymptomatic employees globally as part of a series of regular checks.

“Regular testing on a global scale, across all industries, would both help keep people safe and help get the economy back up and running,” Bezos said in the letter. “For this to work, we as a society would need vastly more testing capacity than is currently available.”

Bezos is right: Amazon can’t wait for the U.S. government to protect its workers. That’s a ridiculous fact, but it’s a fact nonetheless. Luckily for Amazon, the company’s near-infinite resource pool should do the trick when it comes to creating and funding a better system of testing for its employees.

A change of tack — Amazon’s response to the coronavirus pandemic has been spotty, to say the least, and it’s been met with criticism to match. Choosing to put resources toward employee testing could be seen as a welcome change from Amazon’s track record.

But because Amazon’s top priority will always be its business, that’s what this testing initiative really comes down to: it's a business decision, not an altruistic one. The company is struggling to keep up with intense consumer demand right now, and it will only be able to continue doing so with healthy employees to fill those orders. If it could get someone else to pay for testing or could rely on the government to quash the pandemic, you can bet it would.

Amazon wants to do what the government can’t — It’s no secret that the U.S. government has failed to keep up with the demand for COVID-19 testing across the country. It’s been months since the first case showed up in the U.S., but the national capacity for testing falls well below what’s necessary to fully understand the spread of the coronavirus across the country, and stifle it.

Public health should not fall on the shoulders of a private company, but that’s the reality of our current situation. If Amazon doesn’t take matters into its own hands it could massively impact its bottom line.

In his letter, Bezos said Amazon has already brought together a team of scientists, managers, and software engineers to create an internal capacity for testing. The company hopes to build its first testing lab soon.

Amazon always puts itself first — Throughout the pandemic thus far, Amazon has repeatedly pushed the message that its employees’ health and wellness is always the company’s top priority. But its actions have told a different story.

Amazon’s first response to the pandemic was to rush-hire 100,000 new employees to meet increased demand. We later found out that those hiring events were often packed, despite social distancing rules already being instituted across the country. Some involved in the events even reported being mocked for voicing concerns about preventing the spread of COVID-19.

It soon came to light that Amazon did not want to pay its employees for sick time outside their normal allowances, despite the fact that the world is going through a full-fledged pandemic. The company later relented, but only slightly, allowing employees with fevers to receive five hours of paid sick leave. Amazon — a company with a $1 trillion market cap — even looked to the public for donations to fund drivers’ sick leave.

As Bezos outlines in his latest letter, Amazon has indeed made some policy changes to account for the spread of the coronavirus. Every Amazon warehouse has instituted mandatory temperature checks and now hands out masks to all employees. The company has changed Whole Foods’ operations to work with social distancing guidelines and prioritize pickup and delivery orders.

But many of the company’s employees feel that Amazon’s response has been sorely lacking and that their concerns have either been met with apathy or harsh repercussions. One worker was fired after organizing a protest against his warehouse’s lack of action; two others were fired last week for tweeting their own criticism and offering to match donations to warehouse workers. A third employee was asked not to complete his last few weeks of work after inviting some coworkers to a virtual chat with some warehouse employees. Amazon has also threatened to fire workers who fail to comply with social distancing policies.

Let’s call it what it is — Amazon’s promise to test all employees is a win for public health in that it will bring much-needed testing to the company’s massive workforce. When taken into account with its other actions, though, the pledge reads like a purely selfish one.

As Bloomberg notes, Bezos included a copy of his 1997 letter to shareholders in his recent missive as a way of reminding investors that, historically, his long-term thinking has paid off. This is traditional for Bezos, but its inclusion in this particular communication seems to only reinforce Bezos’ profit-centered thinking.

This is not the first time Amazon has taken public health into its own hands — the company has reportedly been working on a cure for the common cold for more than three years. At Amazon, the health of employees is second to top priority — because without them the top priority, profit, is endangered.