“Our descendants are going to move all heavy industry off of Earth — all the polluting industry will be done in space where we have infinite resources for all practical matters and Earth can be zoned, light industry and residential ... Earth can be this amazing garden.” 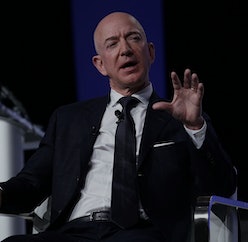 We’ve done enough damage here on Earth, it’s time now to look beyond our horizon and ruin other planets, too. At least, that’s what Jeff Bezos thinks is an appropriate solution.

The CEO of Amazon sat down for an interview at the company’s Smbhav event in India at the beginning of the week to discuss success, failure, and the future of humanity — which he says relies on a push into space.

Bezos has been outspoken on the latter for some time now, especially since launching his aerospace endeavor, Blue Origin; last spring, he unveiled concepts for a lunar lander and futuristic space civilizations designed to meet the needs of our ever-growing, ever-innovating population. Unfortunately, that plan includes dragging our trash, so to speak, right along with us.

“We have sent robotic probes to every planet in our solar system. This is the good one. There are no other good planets in this solar system,” Bezos said. “We have to take care of this one.” A bit late for that one, bud.

Same old soundbites — We’ve heard all of this before. Space is the hot new target for billionaires, both as a prospect for raking in money and as a way to deal with the challenges of humanity, particularly when it comes to Earth’s limitations.

“Earth is a finite planet.”

“We have a choice as a civilization,” Bezos said. Hundreds of years from now, he says, “we can have a life of stasis and — because Earth is finite and we are running into the limits of that when you look at things like climate change."

"If we continue to grow," he added, "and we continue to use more energy per capita,” well, that future doesn’t look so good for us unless we make some serious changes.

And there’s no denying that — We’re facing some tough realities here on Earth thanks to human development and consumption, that’s for sure. Bezos of all people would know about that. But, offloading our bad habits to other corners of the solar system probably isn’t the best way to handle the increasingly dire situation. Still, what the Amazon CEO has to say about that is… interesting, to say the least.

“There are a lot of here and now things that we have got to do to take care of this planet, but longterm if we want to continue to grow our civilization and have the freedom to do that, we have to also use the resources of the solar system,” Bezos said. “And to do that we need a dynamic entrepreneurial civilization in space. We need there to be space entrepreneurs.”

Oh, so it’s really about profit — It might be the Amazon way to put business before people, but you said it yourself, Bezos: there’s a lot to be done in the here and now. So, start doing it. Otherwise, the “humanity” bit of that expansion argument doesn’t really hold up; it’s really just commerce you mean to protect.