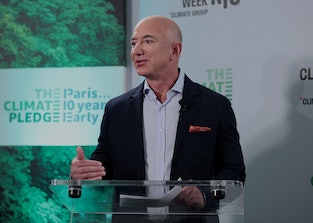 Jeff Bezos, no longer leading Amazon’s quest for world domination, is now just a billionaire without a cause. After staring down the abyss of boredom for a short while, Bezos has found a new hobby: throwing money at the world’s biggest problem and hoping for the best.

Bezos announced this week that he will be donating $1 billion to save forests in the Andes, the Congo Basin, and the Pacific Ocean, as a method of preserving biodiversity and battling climate change. The money is part of the larger $10 billion climate pledge Bezos made in early 2020.

Bezos said in a press conference Monday that the idea for the billion-dollar commitment grew out of his 11-minute, multimillion-dollar trip into the atmosphere.

“Nature is our life support system and it is fragile,” Bezos said. “I’d heard that seeing the Earth from space changes one’s point of view of the world, but I was not prepared for just how much that would be true.”

This guy really needed to be shot into space to understand saving Earth would take more than simply off-carting our pollution to other planets.

Saving the plants — Though we are, as always, feeling a little cynical about Bezos’ self-proclaimed commitments to the future of humanity, there’s room for us to feel like this billion-dollar pledge is a good move. Climate change is causing widespread devastation at this very moment, destroying communities and putting millions around the world in harm’s way. A billion dollars of extra resources — no matter the source — will be helpful.

The Bezos Earth Fund, which has been put in charge of carrying out Bezos’ $10 billion pledge in the next decade, says this $1 billion will go towards the 30x30 commitment, which hopes to “protect 30 percent of land and sea by 2030 to prevent mass extinctions and bolster resilience to climate change.”

It’s unclear where the rest of Bezos’ $10 billion pledge will go. The Bezos Earth Fund says future commitments will focus on landscape restoration and on food system transformation.

Cleaning up his own mess — Because we live in a capitalist hellscape, fighting climate change is expensive. As such, one of our best strategies moving forward is having those who created the problem foot the bill.

And Bezos is certainly a top offender. While not quite to the extent of something like an oil corporation, Amazon’s environmental practices as it’s expanded over the last few decades have been nothing short of staggering. The company’s massive fleet of delivery vehicles, disposable packaging, and general operations are a huge source of pollution. That’s not to mention all the energy used by Amazon Web Services.

Bezos’ billion-dollar pledge will provide a worthwhile start to slowing the spread of the damage his company has caused. But it’s going to take a lot more than a billion to save Earth. We can only hope another carbon-sucking space joyride isn’t necessary for Bezos’ next epiphany.