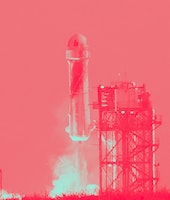 The amount Blue Origin will waive for NASA to reconsider its recent SpaceX contract.

In an open letter penned to NASA Administrator Bill Nelson yesterday, Jeff Bezos thirstily urged the space agency to reconsider its recent multibillion-dollar contract with Sad Technoking Elon Musk’s SpaceX to construct a lunar landing vehicle for the Artemis mission scheduled for 2024. To sweeten the deal, Bezos — fresh off his own, customer-funded trip to outer space — magically conjured up a not-at-all-bribe of $2 billion to gift to NASA... you know, for its troubles.

“Blue Origin will bridge the [Human Landing System] budgetary funding shortfall by waiving all payments in the current and next two government fiscal years up to $2B to get the program back on track right now,” Bezos writes in his plea before making sure to note, “This offer is not a deferral, but is an outright and permanent waiver of those payments.”

Jeff cries foul — According to Bezos’ and Blue Origin’s argument, NASA unfairly awarded its $2.9 billion deal to SpaceX after promising to allow time for at least two private companies to bid for the project. While NASA’s decision to instead skip ahead and work with SpaceX was admittedly surprising, Bezos contends that doing so is contradictory to the spirit of fair competition, that holiest of playing fields preventing “any single source from having insurmountable leverage” over a client... which is just so goddamn rich coming from that guy.

If NASA chooses to stay with its SpaceX decision, here’s to hoping Musk at least learns from his other company’s moon-based errors.

Stuck between a rocket and a hard place — To be fair (and we can’t believe we’re saying this), Bezos has at least a bit of a point about the value of a collaborative effort. As it stands, Musk’s SpaceX will essentially control the entire logistical side of 2024’s Artemis mission by providing not only the HLS, but the massive Starship rocket system to launch it into space. Blue Origin’s proposal instead includes a “National Team” comprised of multiple contractors working together... of course, these contractors include the veritable death factories of Lockheed Martin and Northrop Grumman, but hey, at least there’s some spreading of innovation there.

Then there’s that bit about Elon Musk making Blue Origin / Blue Balls erectile dysfunction jokes on Twitter in response to Bezos’ open letter, a choice that is totally acceptable for, say, writers at a tech-culture publication, but less so for one of the world’s wealthiest wannabe space barons.

Bottomline: we can’t wait to see humans on the moon again, but we’d gladly defer that by a few years so long as it means we wouldn’t have to see Bezos’ or Musk’s logos anywhere near the historic event that should inspire all of humanity, not just the sociopathic future billionaires among us.