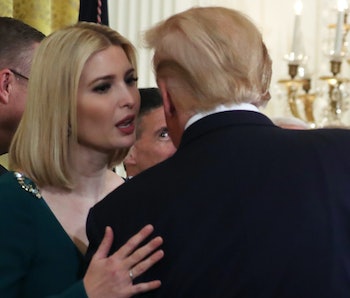 Ivanka Trump is expected to appear and speak at CES in January, according to internal documents reviewed by CNET. Trump, who serves as Advisor to (her dad) the President, will appear at the Las Vegas tech show on a keynote panel with Consumer Technology Association President Gary Shapiro.

The CNET report doesn’t explain exactly what Trump will be talking about, and CES itself hasn’t officially revealed details — but based on her previous record, Trump will most likely bring up the president’s supposed commitment to advancing technology and related employment in the United States.

Should anyone care? — CES is the biggest consumer technology event of the year and Trump's presence, given her role in the current administration could give audience members a chance to hear what she has to say about technology outreach, her father’s trade deals, and job training in the country. Things could even get interesting, considering the fact that Shapiro is a vocal critic of President Trump’s trade blacklist against China and its impact on tariffs and smartphone security architecture.

For Trump, this could be an opportunity to allay the tech sector’s apprehensions about the administration. In the past, Trump claimed that she was working on a job training venture in collaboration with Google's Sundar Pichai. At the time, Trump said, “We know that in order to be competitive in this world, we need to invest in America’s greatest asset, our workers, and help fill the openings in the IT field,” Business Insider reported. She also tagged along with the president to an Apple production site in November and has been in touch with Apple CEO Tim Cook.

All of this, though, is speculation. Details about Trump’s talk will become clear in early 2020. If you’re interested in hearing what she has to say, you can hop on a livestream January 8 at 3 p.m.