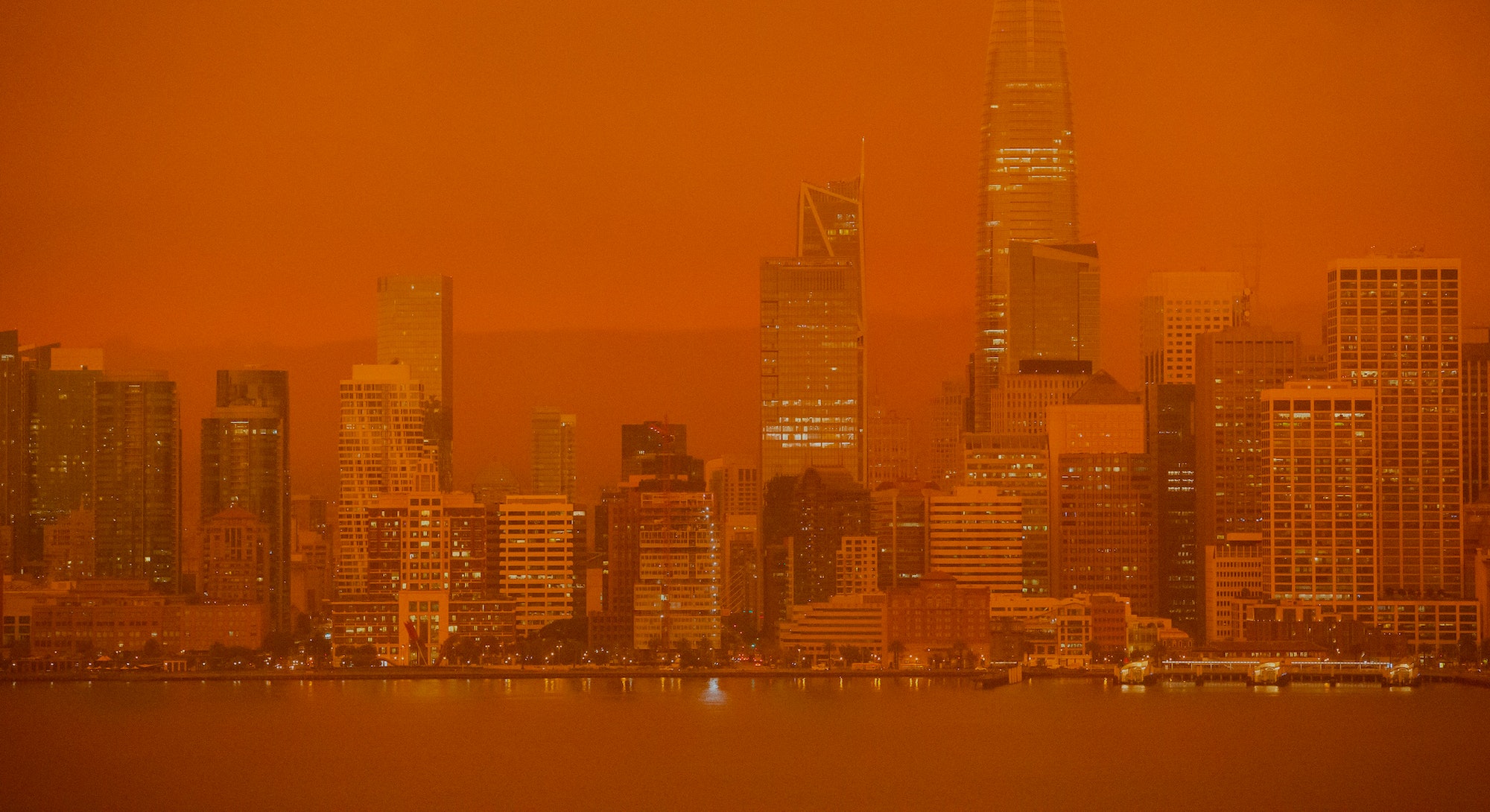 It's the date given at the start of Ridley Scott's dystopian sci-fi masterpiece — then a semi-plausible time in the not-so-distant future when android "replicants" exist nearly indistinguishable among a human populace scrabbling out a living within a dingy, dim, industrialized Los Angeles. Their world is congested by aerial car traffic, blaring advertisement drones, and the looming omnipresence of mega-corporations.

Humanity's toll on Earth's ecosystem has finally caught up with it, and the only real hope for self-actualization, health, and happiness comes from a far-fetched promise of vague "off-world colonies."

November of 2019 came and went, and while our world hasn't entirely caught up Blade Runner, last week (once again) reinforced the knowledge that we should arrive in almost that exact dystopian landscape by, oh I dunno, let's just say 2049. As many documented on social media, California alone has experienced 7,563 fire incidents in just this past year, resulting in over 2.1 million acres of land burned. On Friday, The New York Times' front page reported 100,000 residents in Oregon are now climate change refugees due to similar blazes. The photos coming from these scenes of ecological ruin and catastrophe are apocalyptic in every sense of the word. Even distant areas not actively experiencing these wildfires are seeing its effects.

The sooner you accept that you are literally living within a science-fiction dystopia comprised of deteriorating retrowave infrastructures overseen by technocratic oligarchs who plan to die on Mars, the easier your daily navigation of all this will be.

Don't believe me? Dissect everything I just typed in that last sentence — the one right before the image of a real, retro-futuristic car dashboard as it drives through the Bay Area's rainy, ash-stricken amber haze of distant environmental disaster. Nothing here is an exaggeration. The only thing differentiating our own reality and films like Blade Runner is a heightened sense of Hollywood dramatics. So let's take "Hollywood" out of the equation here, and see if daily life proves less theatrically sci-fi...

I write this as my automated vacuum robot clumsily bumps around my living room in New Orleans, a city existing on borrowed time before the ocean inevitably reclaims it due to rising sea levels brought on by climate change. Later, I'll video-chat with my family from a tablet computer before reading a digital newspaper to get the latest on a proto-fascist administration as it tries to steal an upcoming Presidential election. Leftist insurgents are fomenting public protests to combat said administration's apologists and sympathizers as they hide behind a militarized police force.

I'd turn on a VR headset and quest through a digital fantasy world with my online friends if I had the money. But unfortunately I'm broke, because our Neo-Gilded Age economy has reduced millions like myself to gig-based jobs with no healthcare, retirement plans, or job security. Instead, I'll fall asleep reading from my standalone e-book reader I purchased from a company owned by the world's "wealthiest" man, its rudimentary black-and-white screen flashing between new "pages." In the middle of the night, I'll briefly wake up to near-distant gunshots, the people involved almost certainly existing in a socio-economic class that is also disproportionally affected by a raging, deadly pandemic with no end sight.

But accepting your pre-existing technological dystopia doesn't have to result in passive resignation or debilitating depression. Those are completely natural emotional byproducts of such a situation, of course, but they don't need to be the only ones. It's not detaching yourself or depersonalizing from reality, it's simply a better frame to digest real world events in all their wonder, weirdness, and tragedy without losing your goddamn mind. I've found myself macabrely comforted by the realization that certain science fictions have become real.

I don't feel as unmoored as I did only a couple of years ago; it all just makes so much more sense admitting that some of the most fantastical images concocted for the big screen have simply materialized in the world around us. Of course our digital personal assistant programs with lame-ass "futuristic" names like Alexa and Siri are also spying on us for the transnational corporations that could very well replace our failing governments over the next century. Of course a cult combining a toxic mixture of evangelical American patriotism, contrarianism, End Times scripture, paranoia, and celebrity worship is spreading virus-like across the internet. We are living in a real-life prequel to Blade Runner. What else should you expect these days?

The best of hard sci-fi often has its predictions and suppositions largely proven true. In 1945, Arthur C. Clarke posited the idea of geostationary communications satellites dotting the night sky. Today, over 300 satellites travel above us in what's now known as a "Clarke orbit," with thousands more out there connecting the whole world. The flip phones used in the original Star Trek series are now being (disastrously) re-released for mass consumption. Ray Bradbury's Fahrenheit 451 features characters using devices resembling "thimble radios" and "seashells" inserted into their ears. Today, you can grab a pair of them for $150.

It's only a matter of time before even more of Blade Runner's various facets show up right in front of us. Flying cars may not be the most economic or logistically sound future inventions, but replicants? Well, I just told my girlfriend that the Roomba needs to go back to "her" charging platform, so we're just gonna have to see how that one shakes out.