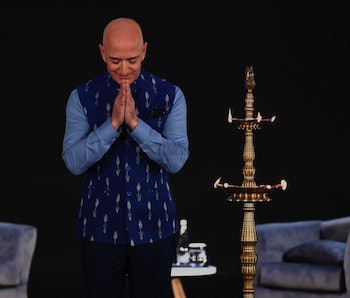 Amazon has been caught in the act. Again. According to a new, extensive investigation from Reuters, the retail and big tech giant is consistently mimicking competitors’ products, down to who manufactures the items, and then manipulating search results to boost its in-house knock-offs to customers.

This directly contradicts sworn statements made by former Amazon CEO and space bro, Jeff Bezos, while speaking to Congress last year. At the time, Bezos alleged that Amazon employees were prohibited from accessing third-party seller data to bolster the company’s “private-label” alternatives.

Reviewing thousands of pages of internal documents from Amazon India that stretch back years, stealing product designs was part of a “formal, clandestine strategy” at the company, one that “high level” execs even knew about and endorsed. This is the second recent Amazon exposé from Reuters, which also revealed the company’s secretive partnerships with major brands to circumvent small business protections in India. The report helped kickstart antitrust investigations within the nation, with reverberations felt in similar probes across the globe.

Not an isolated incident — As Reuters explains, the trove of documents is particularly interesting as they relate to Amazon’s India operations. Amazon first entered the country in 2013 and was initially operating at a loss. In response, the company decided to lean heavily into “private label” items such as those within its AmazonBasics line, with the goal to have its own goods occupy 20 to 40 percent of each Amazon.in product category. To succeed, Amazon announced internally it was “only launching products that will provide more margin than comparable reference brand products.”

That’s sensible business right there. But the problem comes when the company allegedly relied on its rivals’ product data to expressly mimic their items, along with working with the same manufacturers to produce nearly identical alternatives it could sell for less.

The heat intensifies — As unsurprising as it is to hear direct evidence of Amazon’s monopolistic, predatory business tactics, it certainly helps put further pressure on the Big Tech giant as multiple countries intensify their antitrust investigations into it. The hammer looks increasingly likely to fall, but by the time it does, will it even matter? Amazon’s lead in the markets in which it operates is likely already unassailable.