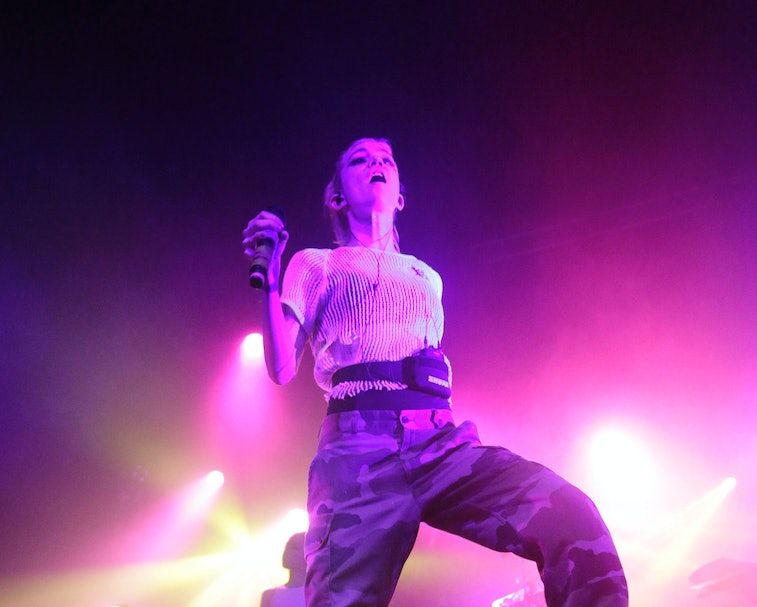 Singer and visual artist Grimes took to Instagram to post a racy picture today, one that now has people speculating if it was a hidden message announcing she's pregnant with Elon Musk's child. There was nothing wrong with the photo, which has now been taken down. It featured her braided hair, her exposed abdomen (with a virtual image of a fetus) and her nipples. If it was indeed a pregnancy reveal, this is exactly the type of content you should expect from someone with the creative genes that Grimes possesses.

This is stupid — It's too bad the picture only lasted about an hour on Instagram, due to the company's controversial policies against nipples being shown on its app. According to Instagram's community guidelines, people aren't allowed to post "some photos of female nipples, but photos of post-mastectomy scarring and women actively breastfeeding are allowed." Additionally, Instagram states that "nudity in photos of paintings and sculptures is OK, too," but that doesn't including traditional photography.

#FreeTheNipple — I started writing this story because I found it interesting that Grimes' post lasted as long as it did on Instagram, especially since it already had nearly nearly 135,000 likes and was the source for tabloids covering the rumor of her pregnancy. While it's good to see Instagram is being consistent with its ban and not giving celebrities special treatment, the entire policy is frankly outdated.

Why is it okay for dudes to post pictures of their nipples but not women? Even Instagram's own rules are vague: "We know that there are times when people might want to share nude images that are artistic or creative in nature, but for a variety of reasons, we don’t allow nudity on Instagram." A "variety of reasons" could literally mean anything, so why not give people the option to look at pictures or videos that may have nipples on them? Why just censor them outright?

Instagram has made progress by allowing nudity to be used as a "form of protest, to raise awareness about a cause, or for educational or medical reasons," but that's not enough. Grimes' picture wasn't causing anyone harm, so it's hard to make sense of why Instagram feels it's necessary to remove it from its platform. Facebook says it has these policies in place because "some people in our community may be sensitive to this type of content," and that it defaults to removing any sexual images to "prevent the sharing of non-consensual or underage content." Is a picture of a woman's chest inherently sexual whereas a man's is not? It's an incredibly retrograde stance from Instagram.

Not a painting — You could certainly make the argument that Grimes' post could qualify as a painting, since it had artistic artifacts on it (like the virtual fetus), but apparently Facebook doesn't agree. "This image has been removed for violating our policies," a company spokesperson told Input, adding that "nudity in digital images isn't allowed."

Is Instagram really a better place without Grimes' post, though? No. It's not healthier or safer. Imagine if Grimes' was actually trying to announce her pregnancy to her million followers — now Instagram has taken that moment away, and all because it can't handle a damn pair of nipples. Maybe it's time for Instagram and Facebook to grow up, figure out a way to not default to an outmoded concept of the female body as innately sexual, and create a platform that deals with REALiTi.

Update: Grimes has posted an edited version of the original picture, sans nipples and with a caption that says, "Censored for insta haha - almost got away w it 😮"