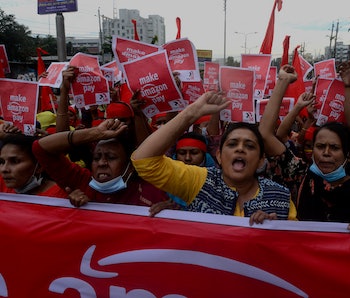 In the weeks leading up to a historic union vote in Bessemer, Alabama, Amazon has taken a uniquely aggressive — and chaotic — stance on social media. The company’s seemingly sudden clash with high-profile Democratic lawmakers, in particular, has brought the company’s official Twitter accounts into the media spotlight.

And then there’s Amazon’s army of social media “ambassadors.” If you’ve spent any time on Twitter in the last few years, you’ve probably seen at least passing mention of these ambassadors. They pop up from time to time when someone is publicly critical of Amazon, ready with a quirky response to prove them wrong.

There has been some confusion about whether or not actual Amazon employees are writing these tweets. They’re strange and prolific enough to be bots, but Amazon has explicitly stated in the past that its ambassadors are real Amazon workers.

A series of new reports this week, including leaked documents and official statements from Amazon, has only made the company’s social media strategy more confounding. It turns out Amazon has been recruiting real humans to be ambassadors since 2018 — but some of the newer accounts are fake.

Handpicked for humor — At least some of Amazon’s Twitter ambassadors are real people. In fact, the company has been hiring actual workers from its fulfillment centers to be vocal on social media since 2018 under the code name “Veritas,” according to leaked documents obtained by The Intercept.

The Veritas project was created by Amazon executives to defend Amazon with a “great sense of humor.” The project description says:

To address speculation and false assertions in social media and online forums about the quality of the FC Fulfillment Center associate experience, we are creating a new social team staffed with active, tenured FC employees, who will be empowered to respond in a polite—but blunt—way to every untruth,” the project description reads.

Veritas employees were directed to create Twitter accounts with handles beginning with “@AmazonFC,” along with an emoji, if they wished, to show personality. These formulaic account names led many to believe the ambassadors were bots, and Amazon eventually clarified that they were not.

But…there are fakes, too — There’s another wrinkle to this story: not all of the Amazon ambassador accounts are real. Amazon confirmed this in a shared statement to various press outlets on Tuesday.

The fake accounts use the same naming schemes as their Veritas counterparts, beginning with “@AmazonFC” and often including a first name. They’re near-impossible to tell apart from the real deal, save for the fact that many were created more recently than those belonging to actual ambassadors. Gizmodo notes that the fake accounts often use avatar photos that appear to be deepfakes, many situated on the backdrop of a generic Amazon fulfillment center.

A whole mess — That’s really the only way to sum this up. Amazon, in attempting to lash back at those critical of the company’s immense greed, Amazon has found itself in a social media quagmire. Real ambassador accounts and fake copycats have mixed on Twitter to the point where they’re indistinguishable. The company’s real anti-critical measures are so snarky, so cryptic, that they, too, seem like something out of a simulation.

We’ll be keeping a close eye on Bessemer as Amazon’s actual workers near the completion of their first-ever union. It’s looking a lot like the company’s intense union-busting efforts may have had the opposite effect Amazon intended.