Ikea bought an entire forest to save it from destruction 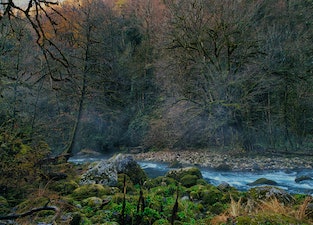 The approximate number of acres in the Georgian forest Ikea's just bought.

Climate change is a species-level issue, but large corporations more often than not fail to see the benefits of investing in a green future. Ikea, thankfully, is not one of those companies.

Ingka Group, the owner of most Ikea stores, recently purchased a 10,840-acre property in southeast Georgia (the U.S. state, not the country), Reuters reports. The organization worked with nonprofit The Conservation Fund to protect the land from development. That brings Ingka’s total ownership up to about 613,000 acres of forest land across Europe and the U.S.

Ikea’s mission has long included looking out for the well-being of the environment, but buying land is still relatively new for the company. That investment will pay off in spades toward Ikea’s goal of becoming entirely carbon-neutral by 2030.

It’s easy to buy up carbon offsets on the internet — it’s another level of commitment entirely to buy full-on forests. And Ikea’s only getting started.

Thanks, Ikea — Ikea is doing heaps when it comes to environmental investments — and for that, we’re extremely thankful. Don’t get us wrong, carbon offsets and supply chain management is important in saving the planet from fiery destruction — but Ikea is really going the extra mile.

Ikea said this week that its 2020 operations used fewer fossil fuels than ever before and that it expects that trend to continue moving forward. Last year, the company sourced more than 98 percent of wood for its products from responsibly managed forests — and announced that, by 2030, at least a third of its wood will be recycled.

Ikea also made other big sustainability moves last year, like discontinuing the sale of non-rechargeable batteries, ending the print version of its catalog, and launching its own secondhand store.

The race for carbon neutrality is on — 2020 was a pretty horrible year overall, but it was, at the very least, a year in which corporations finally started taking responsibility for their carbon emissions. Not all of them, of course, but more than ever before.

Google led that race, as it long has, and by September the company announced it had erased its entire 22-year carbon footprint. Apple pledged to reach complete carbon neutrality by 2030; Microsoft, meanwhile, promised to be “carbon-negative” by then. None of them are using their resources to directly purchase endangered forests, though... at least, not yet.

Ikea plans to continue with its responsible investment streak moving forward — the company has pledged to make $730 million in sustainability-related investments by September 2021.