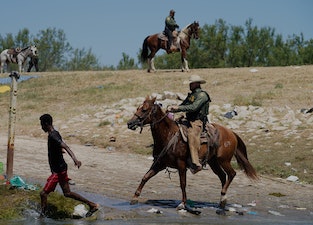 The total value of ICE's new contract with Trust Stamp.

ICE has released only the bare minimum required details about the new contract. It runs from this month through March 2022 and includes software and hardware for facial and biometric capture. The contract says ICE will use the technology as “rapid alternatives to detention enrollments through facial confirmation application.”

The contract states outright that ICE will use Trust Stamp’s technology at immigration detention centers. We don’t need to know much more than that to worry about the outcomes we’ll see from this new program. Facial recognition technology is notoriously bad at identifying people who aren’t white. ICE’s continued adoption of it isn’t leading anywhere good.

The allure of government money — Trust Stamp is far from the only company working with ICE on its mission to find and detain anyone it declares “illegal.”

Just last week, Coinbase — you know, the popular cryptocurrency-trading site — made a $1.36 million deal with ICE for blockchain analytics software. Palantir, meanwhile, has been partnering with ICE for ages and has no moral qualms helping the organization that regularly perpetuates violence against migrants. Clearview AI just renewed its ongoing facial recognition contract with ICE this month, too.

ICE is building an army of self-serving technology. A government entity’s evils are apparently easy to ignore when there’s enough money is involved.

But the artificial intelligence is never 100-percent accurate. More often than not it doesn’t come even close. When you’re talking about implementing this kind of software for government use, those AI mistakes can be life-altering. Legal action is regularly taken against people misidentified by facial recognition software. And, of course, it’s very often outright racist, too.

The other problem is one of power. An arsenal of artificial intelligence, in the hands of those who already have government-appointed power, quickly becomes an unreasonably powerful weapon. ICE is not exactly known for its restraint. Cutting-edge tech, in the hands of ICE, is unwieldy and terrifying.

Hearing ICE has not only renewed its existing facial recognition contracts but also sought out new ones doesn’t exactly leave us feeling hopeful, either. But President Biden just appointed a staunch critic of facial recognition tech to the FTC, and more places are banning the technology. Being misidentified by power-hungry government software does not need to be our future, but it’s going to take legislative will and action to prevent it.