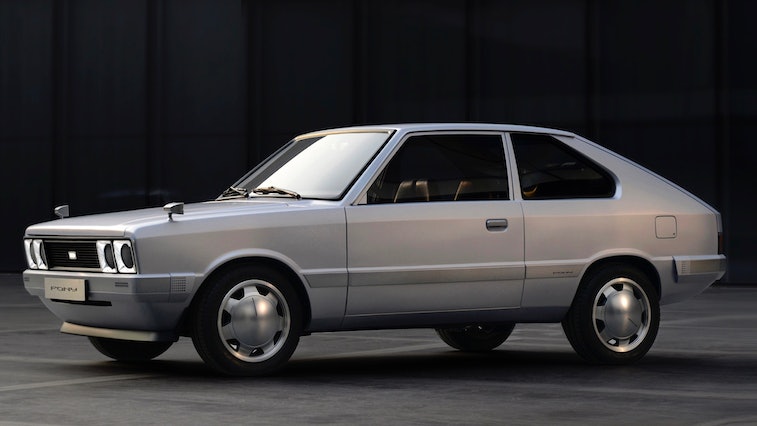 Earlier this month, Ford showed off a ridiculously sexy electric concept truck, the F-100 Eluminator, which featured a design both badass and unlikely to ever see mass production. Although meant to show off the customization abilities of its new electric crate motor (which seems cool on its own) honestly, the pickup’s retro-futuristic look and drool-worthy interior stole our attention. Not to be outdone by Ford’s teasing of cool EVs-that-will-never-be, Hyundai just rolled out two EV restomods of iconic models — the Grandeur and the Pony.

This is just getting cruel, to be quite honest.

Celebrating 35 years — Unfortunately, Hyundai’s concept Heritage Series Grandeur EV is a one-of-a-kind ride built to celebrate the 35th anniversary of the company’s first flagship luxury vehicle. Unlike almost everything else on the roads these days, thing is all angles and edges — and it rules so hard. We’re tired of amorphous blob cars; give us chonky boys once again.

The definition of ‘extra’ — The Heritage Series Grandeur’s exteriors may be retro-as-hell, but the interior is on another level entirely, recalling something like a cocktail lounge in space. There are the prerequisite, massive touchscreen displays you can find in most modern luxury cars, but apart from that, the design is really unique for 2021 — burgundy Napa leather upholstery, dark red LED lighting, sleek metallic trims, and... a wristwatch compartment, for some reason. Whatever, it looks dope, and we’d buy a timepiece just to make use of it, if given the option.

Time to Pony up — Alongside the Grandeur is the Hyundai Pony EV restomod, which exudes 1970’s compact coolness. Like its counterpart, the Pony looks very similar to its original inspiration on the outside, with an interior completely rebuilt to better fit our future chic world. Of particular note is the tube light dash display for its charge life and speed. It’s incredibly extra... and we love it.

Hyundai’s actual EV arrives soon — If it’s any consolation, Hyundai’s very real, very purchasable Ioniq 5 is set to launch by the end of the year. The Ioniq 5 certainly looks like it could become one of Tesla’s chief (and much needed) competitors. While a price point has yet to be announced, drivers can expect something similar to Elon Musk’s lower-end (relatively speaking) models.