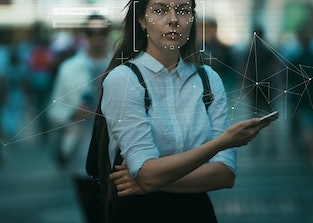 Facial recognition database Clearview AI continues to elicit controversy for its insidious reach inside American agencies. According to BuzzFeed News, the company has managed to distribute its invasive facial recognition software to employees within nearly 2,000 public agencies. And a bulk of this use has been conducted without much supervision.

In many cases, the report warns, the program has been used by federal agents and law enforcement authorities without professional training or the presence and approval of superiors in their ranks. More often than not, the public does not know that this software has been used for recognition searches without their explicit knowledge. BuzzFeed News notes that employees within 1,803 agencies funded by the public have used Clearview AI's software, resulting in nearly 340,000 searches.

As Input reported in 2020, these agencies include powerful departments like that of the Immigration and Customs Enforcement, police departments, the Staten Island District Attorney's Office, and in some cases even members of the Air Force.

Some confirm, others deny — BuzzFeed News asked public agencies out of its database to confirm or deny if they had been relying on Clearview's database of facial recognition searches. In total, 335 public agencies confirmed that their employees used the program and 210 denied it. But the majority — 1,161 public entities — would neither confirm nor deny. The report does not elaborate on the remainder.

Despite the growing criticism about privacy and safety against Clearview AI, its co-founder and CEO Hoan Ton-That praised his startup's collaboration with police departments, claiming to BuzzFeed News that it was "gratifying" to see this partnership. In contrast, critics say this closeness between public agencies and facial recognition software is dangerous for citizen privacy and well-being. Oregon's Democrat senator Ron Wyden told BuzzFeed News that the report was critical to understand Clearview AI's "shady campaign to encourage the secret adoption of its service by local police."

Despite being sued by the American Civil Liberties Union for the alleged violation of Illinois’ law against biometric data hoarding by private firms, Ton-That and team have tried to promote Clearview AI by insisting that the technology is not only cost-efficient but also accurate. But multiple reports demonstrate that not only is unregulated use of such software dangerous for privacy, facial recognition also comes with serious errors, often at the expense of racial minorities and women. None of these concerns bother the makers of Clearview AI. As surveillance state tactics deepen, the startup’s lust for dystopia grows stronger.