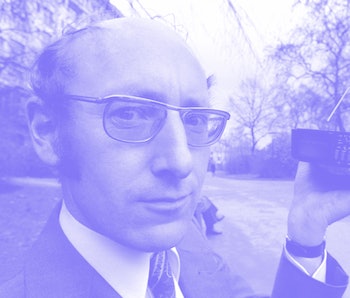 Clive Sinclair, the English inventor best known for helping to popularize home computing systems, died on September 16 after battling a cancer-related illness for more than a decade. Sinclair created the first pocketable electronic calculator in 1972 and his company Sinclair Radionics was one of the first to produce home computers.

Many of the modern tech industry’s titans wrote social media statements about Sinclair upon the news of his passing. Elon Musk also tweeted about Sinclair, saying simply: “I loved that computer.”

Sinclair likely wouldn’t have seen these messages even if he’d been alive today. The computing legend rarely used the internet, despite having had a hand in the general population’s ability to use it. He told interviewers on multiple occasions that he never really used computers at all. Instead, he preferred running, poetry, and playing poker, even appearing in three seasons of the popular show Late Night Poker.

Home computer innovator — Sinclair’s first big breakthrough was the Sinclair Executive, an electronic calculator with a very small footprint. The Sinclair Executive isn’t around anymore, but the tech that made it tick very much is: Texas Instruments’ “calculator on a chip” made it possible for the pocket calculator to use far less power.

The Sinclair Executive was immediately popular upon its release, and its success allowed Sinclair to push into a market he cared more about. His company Science of Cambridge released the ZX80 in 1980, the first home computer system available for under £100. That price point — and that of its successor, the ZX81 — helped Sinclair’s company bring in £14 million in just a year’s time.

And then there was the ZX Spectrum, released in 1982 in the U.K., which really turned Sinclair into a household name. The Spectrum was produced for a full decade and sold more than 5 million units.

Some flops in the mix — Sinclair’s dreams did occasionally verge into being too ambitious. Following the commercial success of his home computing products, he launched Sinclair Vehicles to develop electric vehicles. The Sinclair C5, launched in 1985, looked like a go-kart, had next to no safety features, and required drivers to physically pedal it up steep inclines. Sinclair expected 100,000 C5s to be sold in its first year; it ended up selling just 4,500.

In the early 1980s, Sinclair Research also created the TV80, a miniature cathode ray tube television. The TV80 sold only 15,000 units and was considered a commercial failure.

Between calculators, computers, electric vehicles, and pocket televisions, Sinclair’s entrepreneurial view of consumer technology played a huge role in changing the tech landscape as it stands today. Even those of his inventions that didn’t make him money were rooted in a prescient view of home tech. Today electric vehicles are commonplace, and we watch TV on our tiny phone screens all the time.