Grumpy Cat is apparently very litigious from beyond the grave 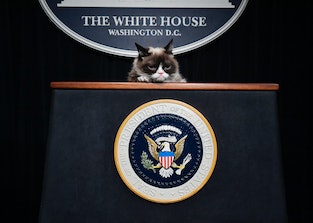 How much Grumpy Cat Limited recently asked for in damages "for each and every use of its trademark."

Tardar Sauce, the feline better known as Grumpy Cat to her fans, unfortunately shuffled off this mortal coil back in 2019 from urinary tract infection complications, but her miffed visage has invariably lived on through countless memes and merchandise across the internet. While we assume most of Grumpy Cat's newer iterations are being harmlessly emailed by suburban moms to their long-suffering children, there are definitely a ton of people out there trying to make an extra buck off sweet, sweet Tardar Sauce's legacy... and the late cat's owners aren't having any of it.

Judging from public filings over the past year or so, over a dozen new lawsuits have been brought against defendants for profiting off of Grumpy Cat's likeness, with potentially hundreds of thousands, if not millions, of dollars on the line for either party.

Lawsuits filed as recently as last week — According to an investigation over at TorrentFreak, Grumpy Cat Limited has gone after a ton of copycats (no pun intended) in the nearly two years since their beloved Tardar Sauce's passing. Last December, for example, at least seven different cases were filed in Illinois alone on behalf of the company, seeking restitution for scalped, knock-off, or resold merchandise.

In one of the most recent examples filed earlier this month, the defendants in question are accused of creating "numerous Defendant Internet Stores and design them to appear to be selling genuine Plaintiff’s products, while selling inferior imitations of Plaintiff’s products." The filing continues to say that "as a direct result of the acts of copyright infringement, Defendants have obtained direct and indirect profits they would not otherwise have realized but for their infringement of the copyrighted products."

Overplaying their paw — While there are many clear examples of Grumpy Cat rip-off swag, the owners of Grumpy Cat Limited seem to be going out on a limb with some of the requested restitution amounts. In one of the most recent cases, the company asked "for statutory damages of up to $2,000,000 for each and every use of its trademark." Given that many of these filings name hundreds of defendants... well, you see where this is going. In the past, judges have issued a mix of rulings for and against Grumpy Cat's Limited's defendants. Last year, one judge ruled in Grumpy Cat's favor, albeit in the most minimal form possible of only $1000 in damages.

In any case, it's pretty certain these kinds of lawsuits will continue for the conceivable future, especially for heavily memed artwork and images. In the meantime, perhaps Tardar Sauce's surviving family should look into turning their beloved cat's image into a Non-Fungible Token.