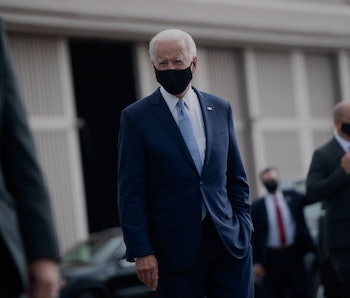 Earlier this week, several interest groups sent a letter to Joe Biden’s campaign calling for the transition team and future administration to not hire Facebook top brass, according to The Verge. In the letter to Biden’s transition team leaders, former Senator Ted Kaufman and Yohannes Abraham, the progressive and veteran groups reference Facebook’s toxicity as the main reason to preclude the company’s leaders and lobbyists from having a seat at Biden’s table.

A strongly worded letter — The well-cited letter lists the numerous ways Facebook has failed the public as a corporation:

“From spreading dangerous COVID-19 health conspiracies and supercharging election misinformation, to promoting racist content about Black Lives Matter protests, enabling white supremacist movements, and serving as tools of authoritarian regimes, Facebook is proving itself unwilling to protect public health, stop the spread of racism and hate, and prevent violence. Despite the rise in intolerance for disinformation, numerous data related scandals, and elevated surveillance, Facebook continues to reign simply due to its lack of competition.”

The letter goes on to liken Facebook to Big Tobacco and the National Rifle Association (NRA), which is arguably an insult to Big Tobacco and the NRA. In addition to lobbyists, the groups call for Biden to not appoint or nominate any “current senior executive, VP, product manager, board member, or c-suite executive at Facebook or in a job relating to policy or regulatory matters at Facebook” to roles in the transition team or administration.

Bottom brass welcome — Before former mid-level Facebookers raise their voices in opposition to the call (assuming they're willing to self-identify as current or former Facebookers at all), the call doesn't extend to all of Facebook's 44,000+ staff. If it did, it would be unreasonable. But it's not unreasonable to call on Biden to avoid those with influence at the company. Because one can hardly expect them to recuse themselves.

They’re hardly twisting Biden’s arm — Though the Biden campaign clearly knows the value of using Facebook as a tool in the election, it’s not exactly friendly with the platform. The camp has called out Facebook’s speech policies, which most recently “accidentally” blocked a pro-Biden ad for being too “sensational.” Still, with his Silicon Valley support now significantly stronger with Kamala Harris as his running mate, it’s easy to see why these groups might be a little worried.

The Biden-Harris combination is far from any progressive's dream ticket, but it’s the only one out of this current hellscape. That doesn’t mean, however, that the public doesn’t get to push them out of their moderate lane and insist they take a stand against one of the most societally ruinous and divisive companies of our age.