Grimes casually admits to extortion, blackmail, and hacking of a popular blog

“We were actually able to DDoS [the blog] and basically blackmail them... that was like my coolest hacker moment.” 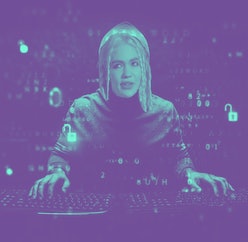 Musician, artist, fan of communism, critic of communism, and cyberpunk cosplayer Grimes got herself a Vanity Fair cover story this month, and you won’t believe the things she revealed. No, not the secret second baby with Elon Musk. And no, not the fact that she and the Technoking are/aren’t dating anymore, either. Oh, and definitely not the new alien scar tattoo she got. No, perhaps the most ridiculous tidbit is when Grimes appears to casually admit to enlisting a friend back in 2012 to help successfully pull off a DDoS attack on the seminal, now-defunct indie music culture website, Hipster Runoff.

The confession comes from the accompanying video shoot for her Vanity Fair cover feature, which was posted to YouTube on March 10 but everyone apparently only just now got around to watching. “Back in the day, like, before the woke era, I actually got canceled for this, which is so crazy,” Grimes says.

Hack the planet — Despite initial attempts to be “all integrity and start [her] career,” Grimes got so mad at the low-stakes gossip site posting a photo of her kissing someone at a rave that she enlisted an anonymous friend in the video game industry to run a DDoS attack on Hipster Runoff’s servers, a move that brought the website offline. They only ceased their campaign once the publication removed the article. “We were able to... basically blackmail them,” Grimes says of her “coolest hacker moment.”

The grimy details — There are a few things that probably require some clarification here. First off, Grimes claims that the photo in question was “leaked” to Hipster Runoff, when in fact it was part of a batch taken for a once very popular website, Last Night’s Party. Also, Grimes’ friend didn’t just pull off a DDoS attack on Hipster Runoff — “the site’s backups had also been destroyed and its server crashed,” according to a past interview with HR’s creator quoted yesterday by the blog, Hacking But Legal. The move was basically the beginning of the end for the website, which was put up for sale back in 2015.

Grimes and her pal didn’t only intimidate Hipster Runoff into removing her photo, they wiped large portions of the website’s archive and backups to the point where the founder decided to move on to other projects. This, of course, is incredibly illegal, although it’s unlikely Grimes — who now has two out of of a planned three or four children with the world’s wealthiest man — will see any actual consequences for this. If nothing else, she probably doesn’t need to worry about being “canceled” over it. Again.