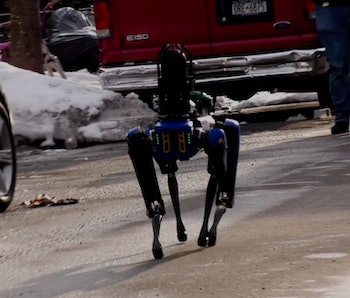 The Bronx woke up to some head-scratching news on Tuesday morning. In a clip shared by Freedom News, videographer Daniel Valls showed the New York Police Department's Digidog in the borough after supposedly helping out with a home invasion situation.

Digidog is about 70 lbs and is able to run a little over three miles per hour. It can navigate places like staircases and walk over wet and snowy ground. The NYPD's technical response group shared this much with ABC 7 last year. In October, the department used the robotic dog in a situation where a gunman had barricaded himself in a home in Brooklyn.

Who asked for this? — While the NYPD justifies the deployment of this robotic dog as a necessary tool in fighting crime, police reform activists have long argued that this kind of technology only exacerbates the widening divide between law enforcement and civilians, edging toward militarization. There are already problems around surveillance and violence primarily targeting communities of color, especially Black Americans. This is the last thing people need right now.

It's hard to imagine the people of Bronx — or any borough of New York for that matter — feeling safer with Digidog parading about on sidewalks. The entire development has reminded many observers of the staggering miscommunication between technological advancement and what everyday people actually need.

Comedian Tim Barnes responded on Twitter with an edit he made in December of Boston Dynamics' robots dancing to jazz poet Gil Scott-Heron's scathing "Whitey On The Moon." You know, the one where Scott-Heron points out how his basic needs and concerns as a Black man were being treated as secondary and inconsequential while the Apollo Moon landings took place. In particular, he points at the governmental neglect worsening social struggles like medical debt, taxes, and drug addiction while other areas were helped to thrive.

If the NYPD sincerely wants to improve social relations and conditions in the Bronx, it could start with some introspection directed at its own ranks and see that de-escalation efforts like addressing mental health and material needs of the local population as well as de-militarizing its own force are good starting points. Imagine that. A robotic blue-and-black dog sounds like a waste of resources at best and another blow to civilians at worst.