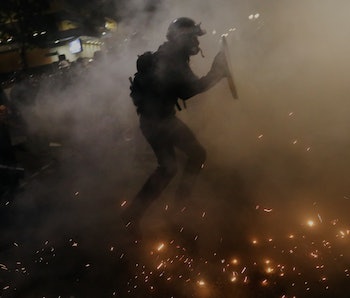 Big Tech still can't quite figure out its role in political awareness and activism, especially as it pertains to the ongoing Black Lives Matter protests. A 30-second ad depicting graphic police violence and sponsored by two liberal political action committees — Priorities USA and Color of Change PAC — was rejected by Google on grounds of potentially distressing material for viewers.

According to The Washington Post, Google isn't the only firm to give the committees a resounding "no"; both Hulu and Verizon have also rejected the video. The only company to greenlight the 30-second reel was Facebook.

What does the ad show? — The term "police state" appears right in the beginning of the short clip, which depicts a police officer in uniform aggressively throwing a pedestrian to the ground. This disturbing spectacle is then followed by yet another officer using a taser on a driver.

In the background, you can hear Donald Trump and his infamous June 2 remarks. "I am your president of law and order and an ally of all peaceful protesters," Trump said in front of White House reporters. "As we speak, I am dispatching thousands and thousands of heavily armed soldiers, military personnel and law enforcement officers to stop the rioting, looting, vandalism, assaults and the wanton destruction of property."

Throughout the ad, various police officers can be seen exercising excessive and disturbing amounts of physical power over unarmed protesters, including a 75-year-old man whose ear bled after being thrown to the ground by a Buffalo police officer.

People will slam Google's move — It is undoubtedly a graphic video compiling some of the most aggressive behavior by the American police. Google's decision to reject the ad may be interpreted as complicity by critics — especially when you consider the fact that the company ran Trump's political ad that depicted similar social mayhem as a veiled critique of the protesters condemning said police violence.

Charlotte Smith, a spokeswoman for Google, told The Washington Post, "We don’t allow advertisers to run ads that contain graphic violence, including depictions of blood, baton beatings, and other instances of physical trauma. These policies apply to all advertisers, regardless of political affiliation."

While the company frames its decision under what it calls a violation of its policy, Google has — whether it likes it or not — entrenched itself deeper in the contentious, heated, debate on civil rights and police conduct in the United States. For many, Sundar Pichai is standing on the wrong side of history.