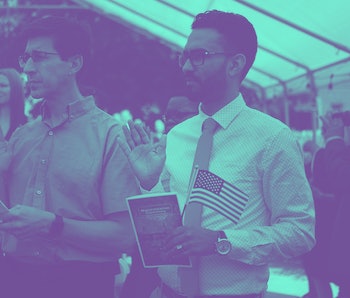 Big Tech behemoths might not agree on much (which is a very polite way of saying they’re constantly out for each others’ blood), but one thing has recently united many of them: their support for their massive pools of immigrant employees, especially when their spouses’ statuses are under legal siege. As CNBC reports, Google has led the charge alongside major players like Amazon, Microsoft, Twitter, PayPal, and Apple in filing an amicus within a major court battle that could decide the fate of tens of thousands of H-4 visa holders.

The case, Save Jobs USA v. Department of Homeland Security, has the plaintiffs seeking the court to overturn a DHS decision allowing H-1B workers’ spouses to also hold jobs as their partners await green cards. Plaintiffs are self-identified in the filings as former Southern California Edison employees “replaced by foreign workers imported on H-1B guest worker visas.” If this ruling were invalidated, Google and others argue, it would endanger the livelihoods of both H-4 and H-1B immigrants, a huge majority of whom form Big Tech’s software and other “high-skilled” workforces.

The amicus argues that a decision in favor of Save Jobs USA “would be utterly destructive for the families impacted; by just one measure, about 87 percent of these families have made crucial life decisions on the promise of H-4 employment, including whether to have a child and whether to buy a house.”

Going after the spouses of Big Tech employees — H-4 visas are often granted to spouses of H-1B holders (the “high-skilled” visa often seen in the tech industry ), thus allowing them to work while their partners await green cards. As such, Save Jobs USA isn’t directly targeting the immigrant statuses of many Big Tech workers, but rather surreptitiously making it next to impossible for these couples to remain in the United States should H-4 holders be barred from the workforce. In this case, Google’s amicus also argues that overturning the DHS decision would disproportionately affect women, given that they account for 90 percent of the H-4 visa owners in question.

Misleading, not to mention subtly misogynist — In addition to being pretty egregiously nativist, Save Jobs USA’s argument hints at a very gendered family setup for these immigrant families, betraying some serious misogynist undertones. Of course, the data paints a fuller picture: nearly 99 percent of H-4 holders have received a college degree, with 60 percent possessing a master’s degree or higher. Two-thirds of the population also have jobs within STEM fields, like their partners with H-1B visas, so it’s likely Big Tech would often be doubly impacted by a reversal in the DHS allowance.

Everyone’s bottom line — If nothing else, Google and company argue, getting rid of the DHS’ 2015 policy would be a huge blow to the U.S. economy, potentially lowering the GDP by $7.5 billion a year alongside a $1.9 billion decrease in annual tax revenue. Likewise, they contend that the jobs lost have been more than made up for by the “6800 jobs created by the H-4 entrepreneurs who have founded companies and employ American workers.” While we’d hope the argument is made on the situation’s ethics alone, having the financial numbers to back up the case certainly doesn’t hurt things.