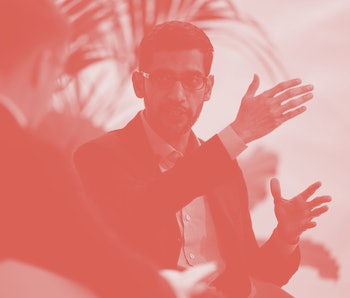 Google rescinded approximately 2,000 contract work jobs today in an effort to cut costs amid the ongoing COVID-19 pandemic. It’s a move that further underscores the stark divide between the way the company treats full-time employees compared to contractors.

“We’re slowing our pace of hiring and investment, and are not bringing on as many new starters as we had planned at the beginning of the year,” Google said in an email reviewed by The New York Times, which reported on the news on Friday. The message, which was addressed to contracting agencies last week, told the firms Google would “not be moving forward” with the onboarding process for many newly recruited contractors.

Google leans heavily on contract workers, who actually outnumber its full-time workforce. The company employs more than 130,000 temp workers and contractors, while its contingent of full-timers numbers 123,000. Despite that reliance, Google has continually chosen to reward its full-time workers while letting its contractors fall by the wayside. Rather than take cuts from the top of the food chain, Google chose here to once again let its part-time workforce suffer, despite claiming last month it would employ those people it had already committed to hiring.

More perks for the full-timers — Google loves its full-time employees and it’s not afraid to show it. The company has always been known for awarding its permanent staff with higher salaries, a full range of benefits, and various perks.

The same love is not extended to contractors or temp workers. The majority of Google’s employees work for lower pay, fewer benefits, and a general lack of job security. This has long been an issue for the company — and in the tech sector more broadly — but the pandemic has made the division within the company clearer than ever.

Last month, Google decided to extend paid sick leave from eight weeks to 14 weeks for basically anyone who needed it — unless they happened to be employed as a contractor, that is. Full-time employees were also told this week that they could spend up to $1,000 on home office furniture during the company’s extended work-from-home period.

Some left stable jobs — One of the most worrisome parts of the NYT report is that some of these contractors-to-be left stable, full-time jobs after receiving offers of employment from Google. Those people aren’t just left without a job in the middle of a pandemic now — they’re also unlikely to receive unemployment benefits because they willingly left their previous employers.

Despite the ongoing pandemic, Google is still worth nearly a trillion dollars. Its top executives make millions every year. And yet, the company that prides itself on being one of the most innovative on earth couldn’t come up with a better solution than cutting off thousands of contractors from their livelihoods. The worst part? You can bet this won't affect Google’s supremacy one bit.

This article was originally published on May 29, 2020