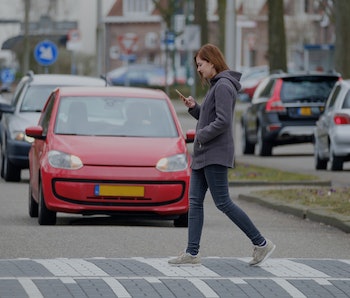 Google’s Digital Wellbeing app available on Android devices can now send you a helpful reminder to look up from your phone every so often while walking down the street. First discovered to be in the works last November, the “Heads Up” feature has gone public within the Digital Wellbeing app’s latest beta update.

When enabled, the new addition will send you a PSA alert whenever it detects you’re on the move. Of course, you could also just... y’know... pay attention to the world around you and be a responsible human being. Still, for those opposed to such a notion, the new Heads Up addition certainly should help everyone else in your warpath for the time being.

“Heads Up doesn’t replace paying attention” — As reported by XDA, the Digital Wellbeing app will now prompt a message at setup saying, “Watch your step with Heads Up…If you’re walking while using your phone, get a reminder to focus on what’s around you. Use with caution. Heads Up doesn’t replace paying attention.” From there, users can press “Next,” after which they can enable an alert to pop up every time the app detects the phone in use while a person is walking.

Currently, the new feature is only available to Google Pixel owners, although it’s probably safe to assume the option will begin showing up on other devices in the near future.

As depressing as it will be helpful — Google’s new Heads Up feature is absurd, depressing, emblematic of our digital addictions... and probably pretty helpful, if we’re being honest. How many times have people been lost in their daily doomscrolling while walking down the street? Of course you haven’t done something so inane (and neither have we, obviously). We’re purely talking about all those hypothetical “others” out there. You know the ones. They’re probably almost walked into you.

If only the Pixel was worth the distraction — While potentially a helpful new feature, we’re not sure if Pixel is the best phone to showcase Heads Up’s utility. Apart from some great camera improvements in recent years, it’s honestly felt like Google has lost a lot of interest in the smartphone market. While there are rumors of a foldable Pixel due out sometime this year, the company has kinda just coasted by for a while now. Green Pixel Buds aside, there’s not a lot to write home about at the moment, so until the Heads Up addition begins rolling out on other Android devices, this feels like an extremely limited release of somewhat limited utility.