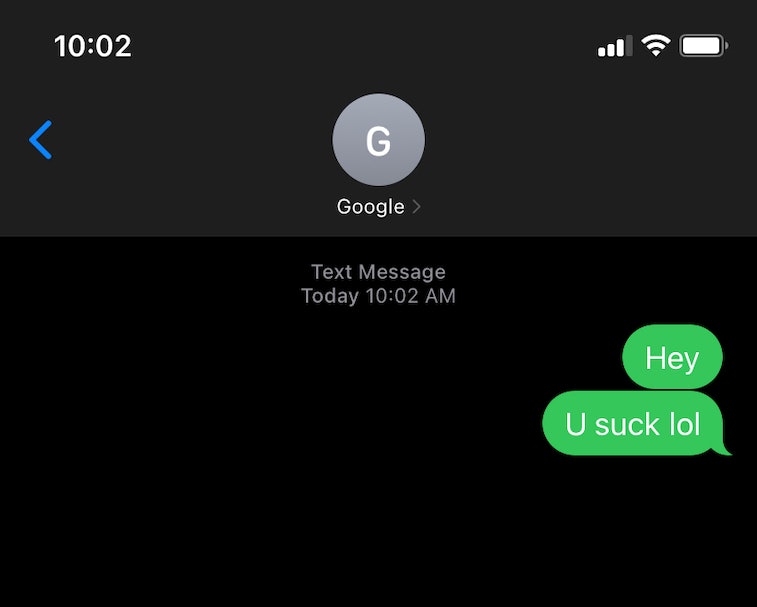 Coke and Pepsi. The Beatles and The Rolling Stones. DC and Marvel. Pop-cultural rivalries bring out the fieriest opinions in people. And of course, the tech industry’s example is no different: Apple versus... well, pretty much everyone else.

It’s a battle Tim Cook and company have been happy to foster for years. Case in point: The long-standing blue versus green text message bubbles denoting whether one is using an iOS or Android device. The demarcation isn’t merely aesthetic — it determines what messaging features can and can’t be supported between contacts. Generally speaking, a green background denotes far more restrictions, while the blue iMessage allows for far more capabilities.

The issue has gotten so contentious that Google’s senior vice president, Hiroshi Lockheimer, recently accused Apple of engaging in digital “peer pressure” and “bullying.” While that might be a bit of a stretch, it’s hard to argue against how annoying it is to text someone and realize they’re stuck with the dreaded green bubble of limitations. It’s something Apple is more than happy to let stand if it means more people eventually cave to making the iOS switch.

‘Disingenuous’ decisions — Over the weekend, Lockheimer shared a piece from The Wall Street Journal about teen preferences for iOS over Android messaging platforms. “Apple’s iMessage lock-in is a documented strategy. Using peer pressure and bullying as a way to sell products is disingenuous for a company that has humanity and equity as a core part of its marketing,” he wrote, adding that “standards exist today to fix this.”

Lockheimer has argued that Android’s support of Rich Communications Services (RCS) is something Apple can, and should, also develop for more universal messaging stability. He’s even previously offered his expertise on the technology to Apple, but apparently, the company never took him up on the chance. Of course, Google has also tried to develop its own proprietary messaging platforms, too. It just never got around to releasing any of them.

Workarounds exist — Until the distant future’s harmonious iOS/Android peace treaty, users of both respective systems will probably need to settle for the occasional texting headache between devices. That said, there are a few workaround solutions out there, such as Beeper. Developed by Pebble smartwatch creator Eric Migicovsky, the service integrates 15 various chat platforms including Discord, WhatsApp, Slack, iOS, and Android messaging.

There’s a catch, however: It’s $10 per month to use the service... and you’ll often need to use the jailbroken iPhone 4S that Beeper ships to you upon enrollment. Ah, the difficulties of life.