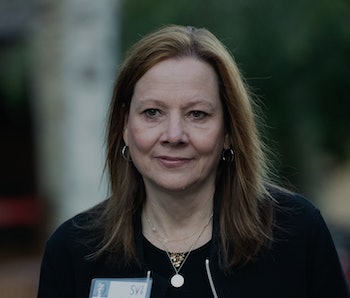 Biden will be the next President of the United States, and unsurprisingly, the CEOs of some major companies are suddenly flipping their positions to what's most politically expedient. Today, General Motors said it would drop its support of a Trump administration lawsuit seeking to end California's right to set its own clean-air automotive standards.

CEO Mary Barra told environmental groups in a letter that GM will pull out of the lawsuit, and urged other automakers to do the same. It also supports Biden's plan to expand electric vehicle use, and said it is testing a new battery formulation that will bring down the costs of electric vehicles. The company has been in ongoing negotiations with embattled startup Nikola to manufacture its hydrogen-electric trucks.

California's influence — California has long sought to accelerate the transition to electric vehicles, and has an ambitious plan to ban the sale of gas-powered cars by 2035. Being the state that accounts for the largest proportion of annual car sales in the United States, any efficiency standards dictated by California effectively apply to all automobiles sold across the country. If an automaker's cars need to meet certain efficiency requirements in California, it's easier on the supply chain for automakers to simply sell the same cars across the entire region.

It was just last year when automakers including GM, Toyota, Subaru, and others sided with the Trump administration's efforts to limit California's influence. They argued that inconsistent emissions standards across the country could drive up costs for consumers. But others like Ford, BMW, and Honda supported working within California's stricter standards. Toyota now says it is reevaluating its position following Barra's letter.

Politicking — To be sure, this isn't a brave decision made out of genuine concern for the environment. It's merely a shrewd business move on GM's part to accept the writing on the wall and try to make the best of the situation it finds itself in. Had Trump won reelection, the company wouldn't have backed down, because GM's business making gas-powered cars is perfectly profitable and transitioning to electric is difficult, expensive work. Under the Biden administration, the standards set in California will almost certainly remain, and GM will have no choice but to push ahead with the electrification of its entire fleet. At least it appears that the industry won't be so fractured anymore.

Tesla has proven electric vehicles can be sold at a profit, even though federal subsidies set to incentivize the uptake of EVs fell away at the beginning of the year, after being gradually reduced from their peak of $7,500 pre-2018. It announced in September that it will make more batteries in-house in an attempt to bring costs down further, but it expects to rely on third-party suppliers until at least 2022.

In other news of CEOs flipping, it's been reported that Facebook is now playing damage control, trying to mend its relationship with Biden following months of complaints from his campaign team over the company's unwillingness to address false information on Facebook about the election and the coronavirus pandemic. It reportedly intends to heavily promote a vaccine in the News Feed once it's available.

Biden is already having a big influence and there are still 58 days until he's inaugurated.

CORRECTION: An earlier version of this story suggested Tesla still benefits from federal subsidies for EVs. That's not the case. We regret the error.