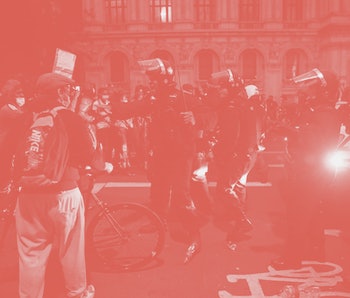 By this point, we’ve come to realize our smartphones are always keeping track of what we’re up to. But just how dangerous that tracking data can be remains up for debate. That uncertainty can prove anxiety-inducing, especially with displays of rampant police violence against protesters being broadcast across social media at an alarming rate, and calls from various quarters to use force against protesters.

Just as worrying, there is precedent for police to use location data to track people without warrants. It’s a technique called “geofence” warranting, and CNET explains law enforcement can use it to track those associated with a given location and time. They could, for example, be used to figure out who was present during a protest.

While there is no evidence that geofence warrants are being used for current protests, there are many precedents of these warrants being used in cases related to other, similar protests, or to crimes like bank robberies. Aside from the dubious ethics of using location data to infer involvement, doing so can lead to false positives, as in the case of someone on a bicycle riding down the wrong street at the wrong time.

The good news is that there are ways to protect yourself from these data-caching warrants. When those in power cannot be trusted to protect us, we must protect ourselves — and our data — instead.

Lose the location history — It’s blatantly obvious that law enforcement is enraged at the continued protests across the U.S. In fact, the federal government has even given the DEA special permission to surveil citizens in cases not related to drugs — which means there are more people than ever keeping an eye on your activities.

There are, fortunately, some steps you can take to keep your location secure from prying eyes. The first of these is to turn your location off completely. All of it, including your location history. Turn off your Wi-Fi, Bluetooth, and mobile data, if you’re not trying to communicate with fellow protestors. If you can afford to, buy a burner phone or pay cash for a new SIM card, and don't sign in to your Google or other accounts with it.

And it’s important to keep other kinds of data secure, too. Download a chat app with end-to-end encryption, like Keybase or Signal. Scrub your photos of all metadata and blur or blackout faces to protect your anonymity.

Google is complicit — Much of the information used for geofence warrants comes from Google because of the tech giant’s reach across multiple mobile operating systems. The company is open about its involvement with these initiatives.

"We vigorously protect the privacy of our users while supporting the important work of law enforcement. We developed a process specifically for these requests that is designed to honor our legal obligations while narrowing the scope of data disclosed," says Richard Salgado, Google’s director of law enforcement and information security.

Though Google does not comply with requests without a warrant, it has refused to speak on whether or not it would comply with geofence warrants related to protests. Which means it's not worth taking the risk that it will.

Abuse of power? — If the idea of a wide-reaching warrant based solely on your phone location sounds like an abuse of power, you’re not alone. The National Association of Criminal Defense Lawyers is currently fighting over the constitutionality of geofence warrants in a case in Virginia.

In the meantime, though, geofence warrants are considered a legal, practical solution by law enforcement. The best thing you can do is hide your location as often as possible, but especially if you're headed somewhere you think might prove problematic down the line.