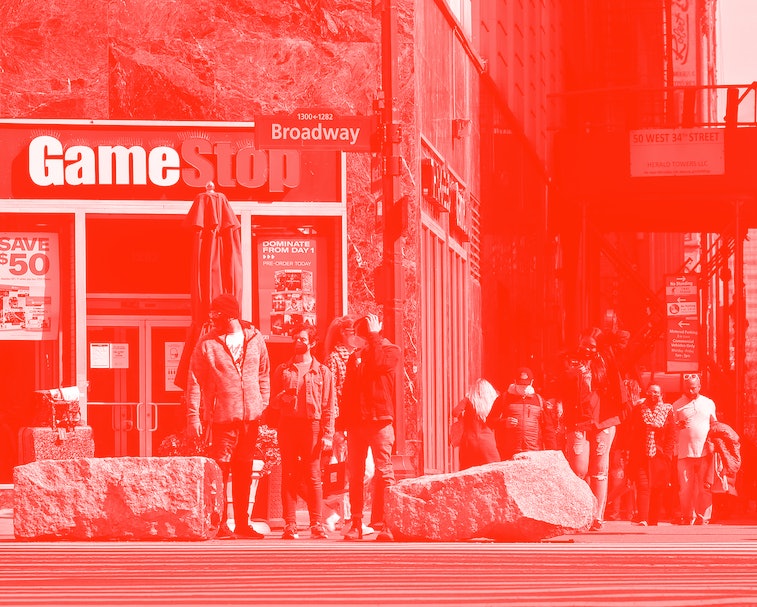 Still riding high on the unexpected meme-based success of its stock last year, GameStop is gearing up to make moves into the NFT market. We’re not talking one NFT drop, either — the company has created an entirely new division to develop its own NFT marketplace and broker crypto partnerships.

More than 20 people have already been hired for this new crypto arm, The Wall Street Journal reports. People in the know say GameStop hopes to market its NFT platform as a go-to for buying and selling virtual game items like clothes and weapons.

GameStop is by no means the first to consider this concept. Gaming companies — Ubisoft, most prominently — have been working up NFT schemes of their own as of late, because, well, there’s a lot of money to be made in crypto right now.

But GameStop is a different beast entirely. As one of the last remaining nationwide video game chains around, the company holds significant power. Especially now that it’s worth more than $10 billion.

Some really good luck — The last half of the 2010s wasn’t great for GameStop. Okay, it was really bad. Consumers had much less reason to go shopping at GameStop, once digital downloads became prominent on every major gaming platform. The company’s sales and market cap plunged by the billion.

Then last year’s r/WallStreetBets short squeeze, essentially the product of good luck, raised the company’s stock price 1,500 percent in two weeks. The price has declined significantly in the year since, but it’s still up about 700 percent year-over-year.

Now, with some significant cash in its pockets for the first time in years, GameStop is plotting. The company’s management has changed significantly since GameStonks happened, including a new CEO, CFO, and chairman.

The larger turnaround — The NFT marketplace is just one piece of GameStop’s broader plan to resurrect itself. There’s more crypto magic in the works, for one thing; WSJ’s report says GameStop is almost ready to sign partnership deals with two crypto companies to invest in developing games that utilize the blockchain. Similar agreements are planned for more than a dozen other crypto companies.

The problem GameStop still faces is that the majority of its business relies on foot traffic. We are still in a pandemic; people are buying games online more than ever. GameStop’s overall revenue has continued to decline even as its market cap has skyrocketed.

Cashing in on the NFT craze while it’s still nascent could be the perfect way for GameStop to turn its sales around. Or at least that’s what the company hopes.