GameStop employees on r/WallStreetBets: 'They’re rubbing [it] in our faces.'

“I think r/wallstreetbets is an obnoxious cesspool of the worst that Reddit has to offer.” 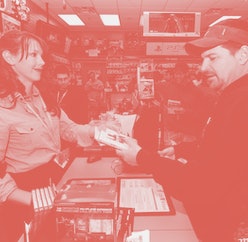 As of writing this, GameStop's stock value is around $350 a share, not too far from its improbable record high of $483 from earlier this week. The mind-boggling jump in worth isn’t due to a major retailing breakthrough on the company’s part (quite the contrary, actually), but rather the chaotic hivemind energy being generated by the r/WallStreetBets subreddit. Part stock market protest, part socio-economic trolling, part WTF — GameStop Stonkgate 2021 is interesting to watch unfold because (long, long story short) it’s screwing over wealthy hedge fund vultures betting on capitalist ruin while also pointing out the inherent absurdities of Wall Street trading.

We won’t give you a detailed rundown of exactly what’s going on (much smarter people have summed it up here, here, and here), but it did get us wondering: How do actual GameStop employees feel the situation? After all, they are the ones experiencing the retailer’s notorious shittiness on a daily basis (perhaps comparable only to the app that enabled all this, Robinhood, who today offered morally troubled employees a $40 DoorDash credit). We reached out to a few GameStop employees, who all spoke anonymously because of the company’s long-standing policy that forbids them from speaking to reporters.

'The worst that Reddit has to offer' — “I find it funny,” one employee told Input. “I’ve bought and sold stock in GameStop a few times. I’ve often doubled my money and then got out, not trusting the hype, being it isn’t based in reality. As an employee and someone who vaguely understands the market, though, I’m tired and sickened by it. Effectively, it’s a wave of people ignoring everyone who is practiced, degrees [sic], and studied in the field of economics and literally just brute-forcing the stock price up.”

That said, the same employee didn’t foresee any real change trickling down to store levels. “I’m sure we will have to hear about it from customers, and more annoyingly on conference calls thinking it has any impact on us,” they said. “The people benefiting from this in corporate are so detached from the stores, it would shock me if the store level even saw anything.”

Many are leery of publicly criticizing GameStop, even anonymously, for fear of managerial retaliation. Multiple employees recounted that they are explicitly barred from speaking with writers and press on any topic, even before the past few weeks' stock absurdity. "That's a firable [sic] offense. And I'd like to keep a job while the pandemic rages on," said a second, unnamed employee.

That GameStop worker didn't mince words in response to the situation, though. "I think r/wallstreetbets is an obnoxious cesspool of the worst that Reddit has to offer," the employee told Input. "I do not appreciate them coming in and shitposting in r/GameStop. It's like they're rubbing in our faces that they've made millions while we see nothing of it."

Banned on r/GameStop — Fed up is sentiment is shared by many, including the moderators of the actual r/GameStop subreddit, a page counting over 55,000 subscribers that is primarily used by employees trading insider news and general labor gripes. "Attention: Posts about the stock will be removed, yes we know what is going on, no we will not entertain it," reads a pinned post from moderators yesterday. "We are not going to allow a subset of users attempt to influence others in making a bad decision. If you are not used to the stock market now is not a good time to get in, yes there is potential to make a lot of money, but the people who are, are ones who know what they are doing."

The moderators closed with a plea to "not let a little manipulation influence you," explaining "This is just like gambling, you could lose everything. The moment the Reddit subgroup decides to sell, the stock will tank, and that can happen at any instance."