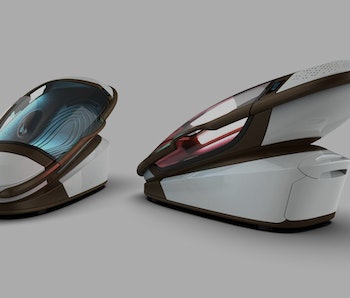 Those in Switzerland suffering from excruciating pain and terminal illnesses will soon have a new, safe, painless, and legal method of choosing assisted suicide as an end-of-life option: As reported by multiple outlets, Swiss authorities have legally cleared the way for usage of the long-debated, controversial Sarco device.

Developed by longtime right-to-death advocate, Philip Nitschke, the Sarco is billed as a relatively cheap, 3D-printable capsule that allows a person to fit inside comfortably and engage a system which delivers nitrogen gas into the chamber. After following a brief state of “happy hypoxia,” a person then painlessly slips into unconsciousness, with death occurring within 5-10 minutes thereafter. Experts estimate that usage of the Sarco could begin in Switzerland as early as next year.

No pets allowed — We feel it’s somewhat important to note here that the Sarco is intended solely for humans. This might strike some of you as an odd aside, but, well, you should check out the following promo concept image on Sarco’s official site:

No, your eyes do not deceive you. That is most definitely a woman just chilling in a death chamber with her beloved dog. This raised a number of questions for us, namely: Does this thing euthanize pets, too? If so, is that woman wearing an O2 tank mask so she doesn’t also expire? Or, in keeping with the product’s name, is Sarco offering a transition to the afterlife for both you and your animals, a la ancient Egyptians?

Of course, we had to know more, so we reached out to Sarco ourselves. “No not at all,” they wrote back in an email, adding that “the dog is simply part of the [company] family.” They also made sure to note that “Sarco is not about euthanasia for pets,” so there’s that. Whew. This was about to get dark... er.

The design of death — Unlike many other assisted suicide and euthanasia options, Sarco’s aesthetics and marketing are meant to radically alter the way society envisions one’s potential final moments. Resembling a sci-fi cryo-stasis pod instead of a casket or hospital bed, the Sarco can be 3D-printed in sections, and is even portable to allow its users a more comfortable choice of final surroundings. “The elegant design was intended to suggest a sense of occasion: of travel to a ‘new destination’, and to dispel the ‘yuk’ factor,” reads Sarco’s official website.

The capsule was also created with ease-of-use in mind — no medical knowledge is required to operate the device, no illicit or difficult to obtain drugs are needed, and there is no need for outside participants’ involvement (the latter of which ensures legality in many countries).

The strategic choice of Switzerland — Getting greenlit for usage in Switzerland was a very conscious decision by Sarco’s makers. The nation is one of the few in the world where both euthanasia and assisted suicide are legal. As ZME Science notes, the country recorded 1,300 people who employed end-of-life procedures just last year. It’s also, one might imagine, a country far more accepting of what is by some considered a radical, even unethical field of practice.

Here in America, the legality is determined on a state-by-state basis. As of right now, only California, Colorado, and Hawaii allow physician-assisted suicides. It’s unclear how the Sarco will affect these procedures stateside, but regardless, its slow adoption is an undisputed win for right-to-death advocates.