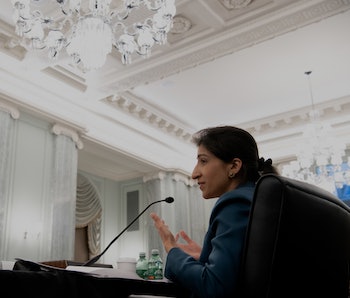 The Federal Trade Commission (FTC) has released a new report about Big Tech’s anticompetitive practices that manages to be somewhat disparaging to both corporations and its own ranks. In presenting the report, FTC chair Lina Khan said merger watchdogs, including the FTC itself, must do better to keep score of smaller acquisition transactions, hundreds of which have flown under the commission’s radar in the last decade.

The study focuses on acquisitions made by Apple, Amazon, Google, and Microsoft, though the FTC’s advice is not by any means limited to those specific companies. Khan’s public FTC meeting about the report concluded that watchdogs should be more assertive in closing loopholes that allow these transactions to slide by without investigation.

Better late than never? — This week’s report is the culmination of research started by the FTC back in February 2020. The initiative’s goal was always very pointed: Quantify the many smaller acquisitions made by Big Tech companies between 2010 and 2019. Corporations are only required to report their acquisitions if they’re worth more than $92 million. This rule is taken advantage of more often than not so companies can keep their smaller deals out of the purview of watchdogs.

The FTC’s investigation found that, between the five of them, Apple, Amazon, Google, and Microsoft made 8616 not-reported acquisition transactions. Of those, 94 did actually go over the $92 million mark but met other criteria that let them slide by. Three more would’ve hit the threshold if they’d added debts and liabilities; nine more would’ve hit it if “contingent compensation to founders and key employees” had been added.

No more room to slide by — The report, along with Khan’s guidance, follows the FTC’s larger tear against Big Tech. The FTC is no longer willing to allow these enormous technology companies to wield their power unchecked.

That’s not going to let up any time soon. FTC chairwoman Lina Khan, who President Biden appointed earlier this year, has made it her express mission to bring more balance to the tech world. “I look forward to working with my colleagues to protect the public from corporate abuse,” Khan said in a statement at the time of her confirmation.

As Khan stated in the public meeting about this report, it will now be up to the FTC to ensure the next decade doesn’t follow suit. Let’s hope watchdogs take Khan’s missive to heart.