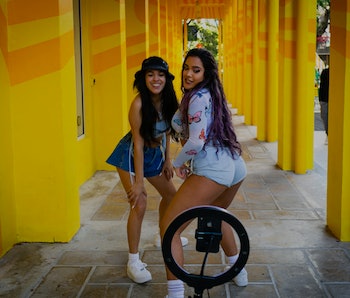 FCC Commissioner Brendan Carr sent a letter to Apple CEO Tim Cook and Google CEO Sundar Pichai asking both to remove the TikTok app from their respective app stores, claiming the app is a Chinese surveillance risk. Suddenly it’s late 2020 all over again.

“TikTok is owned by Beijing-based ByteDance — an organization that is beholden to the Communist Party of China and required by the Chinese law to comply with PRC’s surveillance demands,” Carr’s letter reads. “It is clear that TikTok poses an unacceptable national security risk due to extensive data harvesting being combined with Beijing’s apparently unchecked access to that sensitive data.”

Concerns over TikTok’s processing of data came to a head in the second half of 2020, when former president Donald Trump pursued a vendetta against the app within an inch of its life. Those (as-of-yet-unconfirmed) worries resurfaced earlier this month when leaked calls revealed U.S. user data was being sent to China after all.

The threat Carr perceives is that TikTok is collecting user data and then routing that data through China. It’s China that’s the issue here and always has been; the perceived threat of China’s surveillance practices is exactly why Trump tried to force ByteDance to sell TikTok to a U.S.-based company.

TikTok says it routes all U.S. data through American servers, though it’s unclear just how much of that data is currently accessible from China. No hard evidence exists to demonstrate that the People’s Republic of China has accessed any sort of sensitive data.

The call is coming from inside the house — It’s difficult to say whether or not Carr’s alarm bells are warranted here; there is certainly reasonable doubt around how much data is actually being funneled through China. Because of this doubt — and the FCC’s general lack of control over app stores — Carr’s request probably won’t go far at all.

Moreover, Carr’s quick insistence on the complete removal of these apps stands in high contrast to the FCC’s general disinterest in fighting for consumer data protections. In the wake of Roe v. Wade being overturned, for example, women worry their period-tracking apps aren’t using robust enough privacy policies. You don’t see Carr (or any other FCC official, for that matter) writing open letters about removing these apps from the market.

Focusing on TikTok data — which is, for the most part, not very “sensitive” — while the U.S. doesn’t even know how to handle its own healthcare data makes it clear that the latest TikTok craze is, as always, about China. Protections for the consumer are an afterthought at best.